Rebel without a Cause 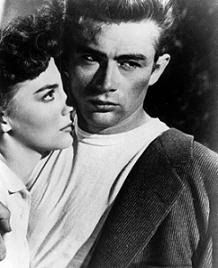 Nancy and I recently watched the classic 1955 film Rebel Without a Cause for the first time. With its young co-stars, James Dean, Natalie Wood and Sal Mineo, it was one of the first adolescent angst movies that would capture the imaginations of viewers in that world of fifty years ago. Although the genre has by now become something of a cliché, its contemporary impact can nevertheless be appreciated in retrospect as we recall the huge changes occurring in North American popular culture in the years following the Second World War. Rock and roll was just gathering steam, and a distinctive youth culture, reinforced by postwar prosperity and overindulgent parents and incubated in the ubiquitous public secondary schools, was exploding into a frequently unpleasant reality — both for parents and for the adolescents themselves.

Rebel captures this moment well. The three principal actors deliver impressive performances, and one can hardly equal the evident interpersonal chemistry among them. The main flaw is that the script's psychologizing is too obvious and heavy-handed. Dean is rebelling against an overly passive father unable to stand up to his mother's domineering ways. Wood is starving for affection from a father who withdrew his when she hit puberty. Mineo is hungry for parental love, living alone in the care of an ineffectual nanny while his divorced father and mother live elsewhere. Mineo fixates on Dean as a father substitute and, at one point, says to him, "I wish you were my father" — just in case we didn't already get the message.

The film is held together by a nihilistic thread and a preoccupation with death — from the morbid planetarium show to the tragic deaths of two teens. The planetarium lecturer, Dr. Minton, represents adult authority and authoritatively imparts this nihilistic worldview to his young audience:

And while the flash of our beginning has not yet traveled the light-years into the distance, has not yet been seen by planets deep within the other galaxies, you will disappear into the blackness of the space from which we came - destroyed, as we began, in a burst of gas and fire. The heavens are still and cold once more. In all the immensity of our universe and the galaxies beyond, the earth will not be missed. Through the infinite reaches of space, the problems of man seem trivial and naive indeed, and man existing alone seems himself an episode of little consequence. *

While apparently believing in the ultimate meaningless of existence, the adults in the film nevertheless manage to live respectable lives. Yet in the larger scheme of things there is no compelling reason for them to do so, and the youth have picked up on this. They are simply living out their parents' worldview, even if their parents are unable to comprehend this. Constantly flirting with death, they live as if there is no tomorrow. Tellingly, in the film's timeline there is indeed no tomorrow. The action occurs over a period of just 24 hours.

All three of the film's stars died tragically. Dean was killed in an automobile accident in September 1955, a month before the film opened. Mineo was murdered in 1976. Wood drowned in a boating accident in 1981. The film's title is perhaps misleading: the cause of the adolescents' rebellion is, paradoxically, the ultimate lack of cause for acting differently - for conforming to their parents' expectations when the parents themselves can offer no justification for doing so.
Posted by David Koyzis at 03:24