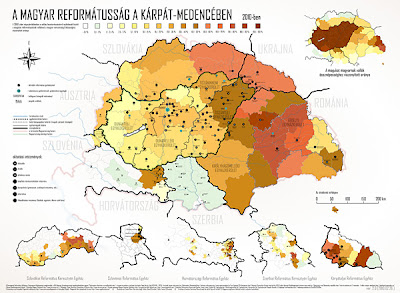 Incidentally, although I have no known close Hungarian family relationships, my genealogical records indicate that my wife, daughter and I are all lineal descendants of Kings Geza I through Istvan V of Hungary.
Posted by David Koyzis at 10:21 1 comment:

Singing the Psalms through adversity: Hungary

The following appeared in the 11 February issue of Christian Courier as part of my monthly "Principalities & Powers" column:

I love the Hungarian people. Among their many national virtues, they boast some of the greatest musicians, such as Béla Bartók (1881-1945) and Zoltán Kodály (1882-1967), who did so much to shape 20th-century music by drawing on their country’s unique folk idioms. There is a substantial Reformed Christian minority in Hungary, and they are well known for their love of singing the Psalms. In fact, it can be justly argued that psalm-singing carried them through four decades of communist tyranny.

Last year saw the 450th anniversary of the completion of the Genevan Psalter. Although the Psalter’s texts were originally written in French verse, they were quickly thereafter translated into a number of other languages, including German, Dutch, Czech and Hungarian. The remarkable polymath, Albert Szenczi Molnár (1574-1634), was responsible for the Hungarian version. A pastor, linguist, poet, writer and translator, Molnár (whose surname means miller) was born in Senec (Szenc), near what is today the Slovak capital of Bratislava, and would come to exercise a formative influence on the development of the Hungarian language.

Molnár travelled widely during his life, visiting and studying in a number of European centres associated with the Reformation. His metrical translation of the Psalms was inspired by the German-language Psalter of Ambrosius Lobwasser and was published in Herborn in 1607. (The Reformed Christian legal theorist Johannes Althusius had published his Politics in Herborn a few years earlier but had moved to Emden before Molnár's arrival.) Molnár died in Kolozsvár in Hungarian Transylvania, now Cluj-Napoca, Romania.

Amazingly, Molnár is reputed to have completed his translation of the Genevan Psalms in less than 100 days, which must surely set a speed record, given that this would require him to translate at least a psalm-and-a-half per day. Molnár’s texts have stood the test of time and are still sung by Hungarians today. The extent to which they are sung can be judged by the increasing numbers of performances posted to such sites as youtube, the sheer number of which might lead the casual observer to assume that the entire Hungarian nation is organized into hundreds of thousands of choral groups.

One of the best-known of these is the Cantus choir of the Reformed College in Debrecen, a major centre of Reformed Christianity in eastern Hungary. The College was founded in 1538, and the Cantus in 1739. The Cantus has recorded choral performances of the Psalms, including Kodály’s arrangements of Psalms 33, 50, 114, 121, 124, 126 and 150, whose continuing popularity appears to be undimmed by the passing of the years.

Hungary suffered much in the 20th century. In 1920, following its loss in the Great War, it was deprived of nearly three-quarters of its territory, leaving nearly a third of Hungarian-speakers in the new states of Czechoslovakia and Yugoslavia, as well as in a newly enlarged Romania. During the Second World War it suffered under a pro-fascist government, followed by 40 years of communism, interrupted in 1956 by a failed effort at freedom quickly crushed by Soviet tanks. However, once Mikhail Gorbachev ended Moscow’s sphere of influence over its “allies,” Hungary was the first to move towards democracy and to begin dismantling the Iron Curtain.

After the chains of oppression had fallen away, outsiders discovered that Hungarians were still singing from the Genfi zsoltár, their sturdy voices ringing out their complaints, petitions, thanksgivings and praises to God, despite the efforts of an officially atheistic régime at silencing them. Small wonder, then, that many of us admire the Hungarians, so many of whom have persisted in giving voice to God’s Psalms in the face of such adversity.

Posted by David Koyzis at 14:05 No comments:

Yesterday's Washington Post carried this article by Michael Gerson: Obama’s new contraception rules try to fool Catholics. This is in response to President Obama's latest effort to soften the impact of the Health and Human Services mandate, which many see as a threat to religious freedom. Gerson's final paragraphs are worth reading:

But President Obama’s policy does not strike me as cynical. Disturbing, but not cynical. The administration has never shown a particularly high regard for institutional religious liberty. Obama’s Justice Department, in last year’s Hosanna-Tabor case, argued that there should be no “ministerial exception” at all — a contention the Supreme Court labeled “amazing.” In this case, the administration views access to contraception as an individual right to be guaranteed by the government, and institutional religious rights as an obstacle and inconvenience. But the First Amendment, it is worth remembering, was designed as an obstacle and inconvenience to the government.

All this is evidence of a deeper debate. Liberalism, back to John Locke, has understood religion to be a fundamentally private matter. It has a difficult time understanding the existence of loyalties outside the law, and often views them as dangerous (unless the demands of faith are harmless and picturesque, like the Amish). But this is not the way many religious people understand religion. They view it as the grounding for a vision of justice, and the source of standards for a community of believers.

It has been part of the American miracle to balance individual rights with institutional religious freedom — a difficult task for which the Obama administration shows little appetite. So now it falls to the courts.

What I find remarkable about this is that, unlike many Americans, Gerson clearly discerns the ambiguous influence on his country of John Locke, a conventionally religious 17th-century philosopher who nevertheless sought to recast state, church and marriage alike as voluntary associations, thereby emptying them of their distinctive institutional characters. Such refashioning called for the privatization of ultimate religious beliefs, ironically in the name of tolerance. One hopes that the Obama administration will come to recognize religious freedom, not as exceptional, but as basic to doing public justice. Thus far the prospects do not look especially promising.

Given this context, I commend strongly the work of my friend Stanley Carlson-Thies and the Institutional Religious Freedom Alliance, whose declared purpose is "safeguarding the faith of faith-based organizations." IRFA deserves our prayers and support.
Posted by David Koyzis at 19:25 No comments: 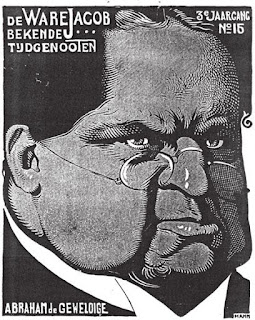 Cartoonists have long loved to take on our political leaders, who have a tendency to take themselves entirely too seriously. From Thomas Nast more than a century ago to Herblock more recently, editorial cartoonists have delighted generations of readers with their biting visual commentary on our politicians and the issues they are elected to address. The great Abraham Kuyper, who served as Prime Minister of the Netherlands between 1901 and 1905, was lampooned as often as any other politician of his era, as indicated in this book, which I discovered today: Kuyper in de caricatuur. Enjoy!
Posted by David Koyzis at 18:49 No comments:

Peter Leithart calls our attention to a rather remarkable phenomenon: Islam and Jesus, drawing on this article in Charisma Magazine: Why Revival is Exploding Among Muslims. Read the entire piece, which illustrates vividly that God works in powerful and unexpected ways to bring people to a saving knowledge of Jesus Christ.
Posted by David Koyzis at 15:01 No comments: