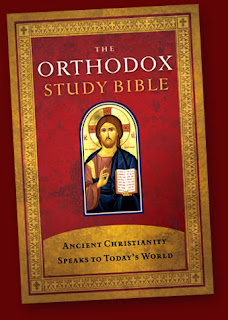 I am eager to see a copy of this volume, which claims to be the "first ever full-length Orthodox Study Bible in English. . . . It uses the New King James Version of the Bible as the basis for a fresh translation of the Septuagint text" of the Old Testament. Perhaps I have missed it from the website, but is the New Testament an adaptation of the NKJV or is it the NKJV itself? Or something else altogether?

By the way, it is well known that the Septuagint (LXX), the 3rd-century BC Greek translation of the Hebrew Bible, assiduously avoids employing the metaphor of rock as a description of God. The biblical scholars I have asked about this tell me there is no general agreement as to why this is. However, when several years ago I asked my father, who was raised Orthodox, he replied, without missing a beat, that it was to avoid associations with the pagans who made idols of stone. Whether or not this is true I cannot say, but it seems to indicate that this view was current amongst Orthodox priests and theologians when he was growing up in Cyprus. I would be interested to know whether others, especially Orthodox believers, have heard this explanation.
Posted by David Koyzis at 11:53