Canada now has a counterpart to First Things, the 21-year-old journal founded by the late Fr. Richard John Neuhaus. It's called Convivium, is edited by Peter Stockland and Fr. Raymond J. de Souza, and is published by the Cardus Centre for Cultural Renewal. The name comes from the homily Fr. de Souza preached at Fr. Neuhaus's funeral. 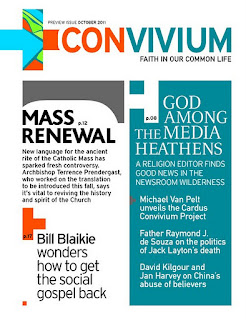 In each issue Fr. de Souza offers Small Talk, "an eclectic and ecumenical roundup of incidents, events and oddities that catch our editor's eye." Here's a sample:

What's the difference between Orthodox and Roman Catholics anyway? Not much, apparently. "The differences are slight," we are told by the Toronto Star. "They use the same liturgies, though Orthodox Christians don't consider the Pope a divine figure." So writes Murray Whyte. No one expects Whyte to know anything more about religion than anyone else at the Star, so it is sad but not surprising that he doesn't know that Catholics don't consider the Pope divine. But does he really consider a dispute about whether a man is or is not divine to be "slight"? Imagine if the Star had been covering the court of Constantine back in the fourth century. Breaking news from Nicaea: Arius and Athanasius quibble over slight differences.

The October 2011 preview issue is now out and subscriptions can be had here. Please subscribe today.
Posted by David Koyzis at 09:54