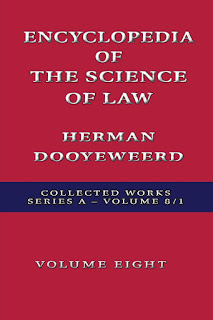 Dooyeweerd was an heir of Abraham Kuyper (1837-1920), the Dutch polymath and statesmen who served as prime minister of the Netherlands between 1901 and 1905, during Dooyeweerd's childhood. I first came into contact with Kuyper and Dooyeweerd when I was around twenty years old and an undergraduate student at Bethel University in St. Paul, Minnesota. From there I spent two years in residence at the Institute for Christian Studies in Toronto, subsequently moving to the University of Notre Dame, where I wrote a dissertation comparing Dooyeweerd's political thought with that of the neo-Thomist philosopher Yves René Simon (1903-1961). Since then I've been working in some fashion with Dooyeweerd's categories in my own work, including my two books. Thus I was keen to read this translation of his Encyclopedia of the Science of Law.

Why encyclopedia? We ordinarily think of an encyclopedia as a collection of volumes of articles on a huge variety of topics from virtually every imaginable field of knowledge. When I was growing up, we had up to four encyclopaedias, whose multiple volumes took up much space on our shelves. Now, of course, such encyclopaedias are digital and online and take up only bandwidth rather than physical space. For Dooyeweerd, encyclopaedia is a "science of the sciences," a universal philosophical framework indicating how a special science relates to all the others. One cannot understand the science of law, which explores the jural aspect of reality, except within the context of all the other aspects of reality of which it is a part. Thus in the first part of this volume, Dooyeweerd explains the principal features of his philosophical system, including the transcendental critique, the modal aspects, the Gegenstand relation, the four religious ground-motives, the distinction between undifferentiated and differentiated societies, the opening process and the historical norms of differentiation, integration, and individualization, and so forth.

The latter part of the book, especially Part 4, the author devotes to setting out the principal contours of his science of law, which one assumes will be laid out in more detail in the subsequent volumes. Dooyeweerd's unique contribution here lies in his recognizing, following Kuyper's notion of sphere-sovereignty, that the different material law-spheres cannot be properly subsumed under such conventional categories as domestic and international law, because the latter blur the distinction amongst these spheres and the internal laws that hold for them. For example, the canon law of a church institution is of a different kind than the public law of the state, which prevents it being classified as either domestic or international. Unless we recognize that law is differentiated by the spheres within which it is valid, we run the risk of levelling these spheres and, consequently, not doing full justice to them.

I found this book enjoyable reading, although the uninitiated will likely find it challenging at best. There are a number of introductions to Dooyeweerd's thought, one of the best of which is Jonathan Chaplin's Herman Dooyeweerd: Christian Philosopher of State and Civil Society (Notre Dame Press, 2011). Dooyeweerd's prose is sometimes opaque, and Chaplin's treatment elucidates his ideas in a very readable way, so I would recommend starting with Chaplin.

I might add that the glossary at the end of the volume is a version of one that originally appeared in C. T. McIntire, ed., The Legacy of Herman Dooyeweerd back in 1985. Albert Wolters compiled the original, and Daniel F. M. Strauss edited it further. Unfortunately, one cannot simply take a glossary from one volume and transplant it into another without accounting for terms unique to the latter. I would like to have seen additional entries for material law-sphere, act-structure, first-order and second-order social forms, radical type, stem type, and variability type.

The late Prof. Elaine Botha (1938-2020) gave me a review copy of an earlier edition (2002) of this volume on condition that I publish a review of it. It has taken me eighteen years to follow up on this, and I dedicate this review to her memory.
Posted by David Koyzis at 17:26