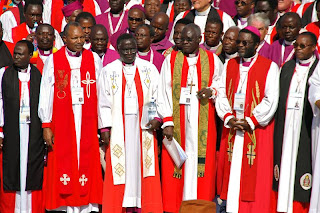 What is the world's largest evangelical denomination? If the recent Global Anglican Future Conference (GAFCON) represents the majority of adherents, it may well be the Anglican Communion. Indeed I have just finished reading The Way, The Truth and the Life: Theological Resources for a Pilgrimage to a Global Anglican Future and find it to be an inspiring document. According to GAFCON's Theological Resource Team, the Anglican Church is a confessional church subject to the authority of Scripture and bound by the Thirty-Nine Articles of Religion, the Book of Common Prayer and the Book of Homilies as confessional and liturgical standards.

Here are some especially striking excerpts from the GAFCON document:

[O]ur place under the alien dominion of darkness is no innocent victimhood. Victims and oppression certainly exist in the world, but a victim culture exists too, and its unhealthy nature has been well-documented. The risk, for the person who portrays himself simply in the role of victim, is that he feels justified in manipulating others, including God, while distorting the truth about his own fallenness. By contrast, an accurate account of human subjection to alien dominion must include mention of our own sin. A purely therapeutic view of the human problem is false, because it underplays the wonders of Jesus’ actions for us: he saved us by his sacrificial, propitiatory death while we were yet sinners (Romans 5:8). . . .

[I]n this obedience that Matthew 28:18 calls for, there can be no competing loyalty. This follows from the scope and the timing of the gift of authority to Jesus. The ascended Christ reigns now in this present age, despite its continuing rebellion, and over all. Thus competing authorities are even now, in reality, subject to Christ. No aspect of human life can claim to be independent of the reign of Christ: all, whether political, economic or artistic, is under Him. . . .

By his enabling, Christians are to read the Scriptures as disciples eager to learn, concerned to have our thinking and behaviour corrected, so that our lives might conform more truly to the ultimate reality of God’s character and purposes. In short, Christians sit humbly under the Spirit-inspired Scriptures, desiring to live holy lives as Christ’s disciples. . . .

Imagine if the Anglican Church of Canada and the Episcopal Church were to catch the spirit of this document. Two declining denominations would be well positioned to follow their African and Asian counterparts into spectacular growth. Rather than making themselves redundant by reflecting the agenda and priorities of the surrounding culture, they would offer the gospel to a sinful world in need of its life-giving and transforming message. May God grant it!
Posted by David Koyzis at 04:06