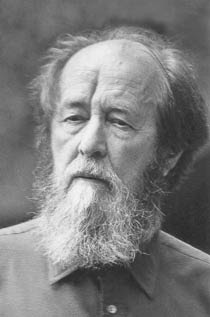 Famed Russian novellist Aleksandr Solzhenitsyn has died at the age of 89. He is widely regarded as the worthy successor to such 19th-century literary greats as Leo Tolstoy and Fyodor Dostoevsky. Together they carried on a long Russian tradition of men of letters serving as loyal opposition in a polity characterized by autocracy and totalitarianism. Tsar Nicholas I is said to have at once admired and feared the poet Aleksandr Pushkin. Similarly, the Soviet-era leaders so feared Solzhenitsyn that they attempted to suppress his output and exiled him for 20 years.

His output was prolific, beginning with his groundbreaking novel, One Day in the Life of Ivan Denisovich, which chronicles a single day in the life of an inmate in one of Stalin's forced labour camps. This work alone ranks with the likes of The Brothers Karamazov and Crime and Punishment as a significant exemplar of the Russian literary tradition.

I myself have been fascinated by Solzhenitsyn's political tracts, beginning with his 1973 Letter to the Soviet Leaders, through his controversial 1978 Harvard address to his 1990 Rebuilding Russia. In the second work he was sharply critical of western decadence and alienated many in the media who had once lionized him. In the first and third works, he sounded themes that would seem prophetic in retrospect: 1) Russia should discard the discredited Marxist-Leninist ideology that had done so much harm to the country; 2) Russia should cast off the nonslavic republics and allow them to go their own way; 3) it should focus on settling and developing the north and east rather than engaging in overseas adventurism; and 4) it must at all costs avoid a war with China, which cannot be won.

Despite or perhaps because of his experience living under an atheistic régime, Solzhenitsyn became a Christian during his time in the Gulag. Having seen for himself the consequences of pursuing a political illusion on a mass scale, he embraced faith in Jesus Christ as the only hope for Russia's future. Solzhenitsyn returned to his homeland in 1994 and lived there for the remainder of his life. Although he could with some justification be called a Russian nationalist and thus focussed most of his attention on his own country, he was capable of seeing through our own political illusions as well: "The West has finally achieved the rights of man, and even to excess, but man's sense of responsibility to God and society has grown dimmer and dimmer." May Solzhenitsyn's words continue to speak to us in a new century.
Posted by David Koyzis at 10:47