I have in my personal library two liturgical books issued by the Church of Scotland. One is The Scottish Psalter of 1929, a thin volume whose split pages, coupled with the regular metres of the versifications, enable a congregation to mix and match texts and tunes in the course of worship. The second is The Psalms and Church Hymnary: Revised Edition, containing only texts (with very small print!) and no music. Both are printed by Oxford University Press. On the front is a shield carrying the ancient symbol of the Reformed Churches, the Burning Bush. Here is the version used by the Church of Scotland, overlaid against the diagonal Cross of St. Andrew: 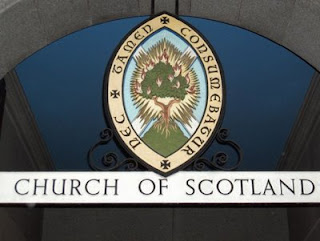 The motto, "Nec tamen consumebatur," is Latin for "And it was not consumed." Some versions of this shield, most notably that of the Presbyterian Church in Ireland, carry an alternative motto: "Ardens sed virens," meaning "burning but flourishing." The symbolism of the burning bush originates with the 12th national synod of 1583 of l'Église réformée de France, which now uses an updated version, overlaid with the Huguenot Cross:

Why the burning bush? The biblical allusion is, of course, to Exodus 3, especially verse 2: "And the angel of the LORD appeared to [Moses] in a flame of fire out of the midst of a bush; and he looked, and lo, the bush was burning, yet it was not consumed." Here's a rough translation from the website of l'Église réformée:

This burning bush, in addition to signifying the mysterious and unseen presence of the Lord, is also the symbol of the decisive meeting between Moses and God, that is to say, the call of God (who calls him by his first name) and the former's response to that call. . . . The logo thus indicates that each of us is personally called by God.

The Reformed Presbyterian Church, Hanover Presbytery, in the United States, uses a modified version of the burning bush:

while the Presbyterian Church in Canada currently uses this stylized version: 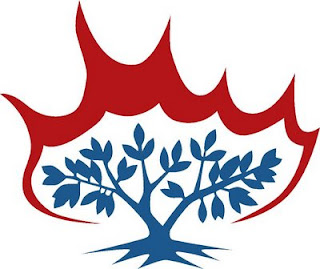 As far as I know the Presbyterian Church (USA) makes no use of this symbol, except for a possible allusion to it in the two small flames at either side of the cross below:

Incidentally, in Orthodox usage the burning bush is referred to as the Unburnt Bush (perhaps a more accurate name), which is strongly associated with the virginity of Mary.
Posted by David Koyzis at 11:20