Authority and the pretence of autonomy

You may not immediately recognize the name, but you will likely recall the famous experiments he conducted at Yale half a century ago. In 1961, a junior professor in psychology, Stanley Milgram, placed an advertisement in a local New Haven newspaper soliciting participants in what was claimed to be a study of memory and learning. The rest of the story is familiar to anyone with an undergraduate introductory psychology course under her belt:

As a respondent to the ad, John Doe is ushered by a white-coated experimenter into a room where another person is seated. Both are told the nature of the experiment about to take place. Having drawn straws, Doe becomes the “teacher,” and the other man the “learner.” 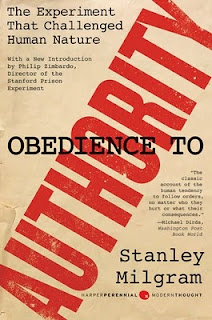 Both are taken to an adjacent room where the learner is subsequently seated at a table. A strap attached to an electrode is placed around his arm, with the teacher looking on. The experimenter explains that the teacher will read through a list of word pairs, which the learner must then read back to the teacher in the correct order. If he misses one of the pairs, the teacher, seated in the other room, will administer an electric shock, beginning at 15 volts, increasing the voltage with each successive error up to a high of 450. The experimenter assures the teacher that the shocks are not dangerous to the learner.

The experiment proceeds with the teacher reading the first pair of words. At the first mistake Doe administers the initial shock to the learner, who is behind a closed door in the adjacent room. At some point, after a few more errors, the teacher hears the first audible, if somewhat muffled, indication of discomfort from the learner. The teacher looks hesitantly at the experimenter, expecting some guidance. The experimenter tells him to continue, which he does obediently. After more errors what started out as grunts from the learner become increasingly urgent cries of pain, coupled with a protest that he has a heart condition and wishes to end the experiment. Increasingly agitated, Doe fully expects the experimenter to intervene and put a halt to the ordeal. But the experimenter remains calm, assuring him that he himself assumes all responsibility for what happens, instructing him to continue.

At this point Doe is confronted with an ethical dilemma. Indeed the experiment is not about memory and learning at all; it is intended rather to gauge the extent to which an ordinary person, commanded to inflict pain on someone else, will do so in deference to authority, even under conditions that appear to compromise his moral commitments.

The entire situation is a set-up. The “learner” is in reality an actor hired to play the part. The drawing of straws is fixed, with “teacher” written on both slips of paper. The “teacher” is given a mild shock before the start of the experiment to give him a sense of what the learner will be experiencing, but, apart from that, the elaborate console in front of him is a façade. The switches he throws do not shock the “learner” at all. The sounds emitted from the other room come from a tape recorder, timed to run after each “shock” is delivered.

How far would the “teacher” go in carrying out orders? Would the subject break off the experiment, thereby defying authority, because he believed he was being commanded to do something wrong? Or would the subject, upon being assured by the white-coated experimenter that he assumed full responsibility, continue to administer “shocks” even up to the “dangerous” level of 450 volts?

Milgram had gone into the experiment believing that virtually all decent people would at some point refuse to go further, because their moral convictions would not allow them to do so. However, the reality was that many people continued to obey the experimenter despite the verbal indications of pain on the part of the learner. “It is the extreme willingness of adults to go to almost any lengths on the command of an authority that constitutes the chief finding of the study and the fact most urgently demanding explanation.”

Milgram concluded that, for people to be brought to the point of performing such an action, they must first abandon their autonomy and enter into what he calls an agentic state, in which they see themselves as no longer responsible for their own actions and as nothing more than agents for carrying out someone else’s instructions. Thus authority, so necessary for human survival, manifests a dark side by facilitating the rise of tyrannies and totalitarian régimes, which rely for their very existence on the obedience of vast numbers of citizens.

Like many people who had lived through the horrors of the Second World War, Milgram was appalled that so many ordinary Germans played their part in the nazi death machine in obedience to orders issued by higher ups. Hannah Arendt’s coverage of Adolf Eichmann’s trial in Jerusalem seemed to confirm that, far from being cruel or sadistic, many nazi officials were mere bureaucrats functioning within an extensive chain of command.

How is it possible that otherwise ordinary, decent people can be brought to the point of doing harm to their fellow human beings? They do so, according to Milgram, by subordinating their own wills to those of others, thereby becoming mere agents of the latter. Their ability to reason morally is thus impaired by the felt need to defer to authority. In the case of these experiments, the presence of authority was conveyed by the white lab coat of the experimenter, by the official-looking venue and by the prestige of the university under whose auspices they were conducted. All of these elements combined to induce the unwitting subjects to give up their freedom and to commit acts they would otherwise not do.

Nevertheless, there are good reasons to question whether Milgram’s dichotomy between autonomy and the agentic state is warranted. Milgram himself admits that, as the child matures, she is subject to various socializing agents, from family and school to workplace and government, all of which aim at the “internalization of the social order.” In this way, the person’s conscience is formed by the very structures of authority with which it may eventually come to stand in tension. In other words, the individual’s internal inhibitory mechanisms are shaped from the outset by various external inhibitors, all of which can be grouped under the broad heading of authority. Even when people believe they are acting autonomously, each decision they make is conditioned, either directly or indirectly, by numerous authorities, the most significant of which have made their impact long before. 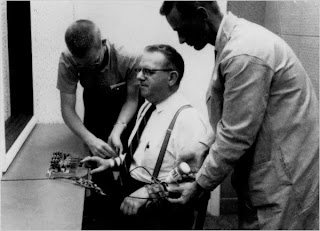 This is illustrated by two subjects whose actions and responses Milgram himself mentions, while nevertheless failing to draw out their full implications. The first subject is the pseudonymous “Jan Rensaleer,” an industrial engineer who was born in the Netherlands and immigrated to the United States after the war. Rensaleer stops the experiment after 255 volts, refusing to go on. He expresses regret that he has gone as far as he has in response to authority, assuming full responsibility for his own actions and refusing to blame the experimenter. Yet, having lived through the nazi occupation of his native country, he is not surprised by the level of obedience in the other subjects of the experiment. Rensaleer reports that he is “a member of the Dutch Reformed Church.”

The second subject is the “Professor of Old Testament,” who discontinues the experiment after 150 volts, surprisingly asserting that “I’m taking orders from him,” that is, the protesting “learner.” Milgram notes that the Professor does not precisely claim to be disobeying as much as shifting his allegiance – from the experimenter, whom he appears to view as merely a “dull technician” of limited intelligence and imagination, to the learner/victim. Moreover, when later asked the best means of fortifying resistance to unjust authority, the Professor replies, “If one had as one’s ultimate authority God, then it trivializes human authority.” Milgram’s response to this claim is remarkable, both for what it indicates about the nature of authority and for his failure to make any more of it: “Again, the answer for this man lies not in the repudiation of authority but in the substitution of good – that is, divine – authority for bad.” This observation could have summed up his analysis of the experiments as a whole, had Milgram treated it as more than just the comment of yet another subject of the experiment.

Both “Rensaleer” and the “Professor of Old Testament” are evidently Christians, having been raised to distinguish between right and wrong. Their claim to selfhood thus lies, not in pretending to act autonomously, but in acting according to principles taught by another authority, or a series of authorities, whose presence is felt more vividly than that of the experimenter.

Milgram’s claimed mental shift from autonomy to the agentic state may not, after all, be an accurate way of accounting for what occurs in the person, either in the laboratory or in ordinary life. Our consciences are formed in such a way as to recognize and obey legitimate authority. Our very selfhood is fashioned in large measure by others, including our parents, schools, churches, peers and, for better or worse, the media.

To be sure, we are not simply the products of our environment, as argued by such radical behaviourists as B. F. Skinner. We grow into and retain our responsibility at every stage of the process of growth. When we come to see ourselves as part of a larger communal whole, we do not so much suppress our selfhood as adjust it to the realities of living among our fellow human beings. Indeed the recognition that we are not alone in the world and must therefore subordinate our wills to others’ for the sake of justice and the common good is integral to the development of the mature self, notwithstanding the views to the contrary of Milgram and his fellow heirs of the Kantian legacy, who persist in portraying deference to authority as a sign of moral juvenility.