One of my pet peeves is the use of the left-right spectrum to categorize the diversity of political visions. There are three reasons for my dislike. First, the terms left and right have no enduring meaning, which has shifted with time. Second, they are frequently used as terms of derision against an opponent, to whom, once we have assigned the label, we have decided we no longer have to listen. Third, they obscure the genuine religious character of the ideologies so categorized. 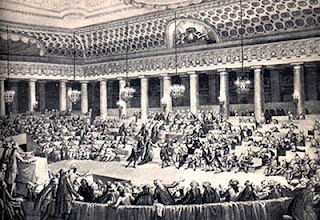 1. The left-right spectrum is no older than 1789, when left and right were used quite literally to describe the groupings seated in the French National Assembly. Monarchists sat to the right of the parliamentary speaker and republicans to the left. There is still a tendency to seat conservative and progressive parties on the right and left respectively in many, but not all, parliamentary chambers. However, the meaning of these terms has changed dramatically in the past two centuries. Virtually no monarchists are to be found in the French National Assembly today, as the monarchy is a dead issue in that country. The same is true of the United States, where left and right have nothing to do with the issue that originated the labels.

Throughout much of the twentieth century left and right were generally understood economically. Those on the right were favourable to classical liberal economic policies with government limited to setting procedural rules only, while leftists tended to support a more interventionist government, as advocated by John Maynard Keynes and his followers, and implemented by the likes of Franklin Roosevelt’s New Deal.

In continental Europe left and right were often understood culturally and religiously, with Christian Democrats and similar groupings seated to the right and the more secularizing liberals and socialists to the left. In more recent decades something of this pattern has come to characterize North America as well. We never had our own French-style revolution, but in the wake of the cultural shifts of the 1960s something of the cleavage between the traditionally religious and the devout secularizers has taken hold here as well. This is the significance of the culture wars we hear so much about. Ten years ago John Fonte wrote of this development in Why There Is a Culture War, in which he saw fit to divide Americans into quasi-Marxist Gramscians and Tocquevillians, with their appreciation for the institutions of civil society. (Also relevant is Gerald De Maio and Louis Bolce, Our Secularist Democratic Party.)

Yet even here the left-right labels are not necessarily helpful. There are many who would find themselves firmly on the side of the “right” on issues of life, marriage and family, yet are suspicious of those who would trumpet the free market as a panacea for all our woes. They might see themselves on the economic left, siding with the labour unions against big business, while they would likely be labelled right-wing extremists by the popular media for being on the cultural/religious right. So where would we locate them on this one-dimensional spectrum?

2. Left and right are as often as not used as negative labels. Once we have assigned one of these to someone, we have given ourselves a reason not to listen further to him or her. Here is where the guilt-by-association game enters the picture. Adolf Hitler was a right-winger. So apparently was George W. Bush. The conclusion is obvious: Bush must have been in league with the nazis. Given that the latter were on the right, how could any self-respecting person possibly sympathize with the right? Every rightist must be a racist or worse, and the best we can do is to place a considerable distance between ourselves and anything that smacks of right-wing thinking and policies.

But, as we all know, the game can be played in the other direction too. Barack Obama is on the left. So was Joseph Stalin, and we all know what he did. Obama is obviously a fellow traveller. If we disapprove of Stalin’s atrocities, then everyone on the left is tainted by these. If we oppose the left and if Tony Blair and Gordon Brown are on the left, we can now safely discredit everything they say, freeing us from the obligation to hear them more closely and to do the hard work of critically engaging their ideas.

3. Finally the use of left and right mask the religious character of the various ideologies on offer. Most of the modern ideologies are members of the same religious family. Each in some fashion makes humanity into a god and all thus have at least this in common. But they differ on which manifestation of humanity they choose to worship. Liberalism, whether in its “rightist” or “leftist” form, idolizes the individual, socialism the economic class, and nationalism the nation-state or ethnic community. Although one might conceivably create a spectrum that places ideologies along a continuum between individual and community, it would be unable to distinguish among varieties of community.

Furthermore, there is a cluster of political doctrines that would be difficult to place along any continuum. Such would include European Christian democracy, the radical Islamism of al-Qaeda and Hamas, and the Hindu nationalism of India’s Janata Party. The rather basic differences among these historic religions could not be easily captured by a one-, two- or multi-dimensional model.

For all these reasons, I would love to exclude completely right and left from the political discourse. However, as this is not likely to happen, I will limit myself to asking readers to be aware of the deficiencies inherent in these terms and not to use them as a way of bypassing more careful and critical means of assessment.

Anyway, why do you say that "European Christian democracy" is "a cluster of political doctrines that would be difficult to place along any continuum" ?

What do you think are/were the basic elements of that cluster? Why do you think this cluster is difficult to place?

Maybe it would be simpler to ask: "What is not Welfare State-ish about European Christian democracy?"