From Wellhausen to 'God's politics'?

Several years ago my friend and former colleague Paul Marshall wrote a review of Jim Wallis' God's Politics for The Review of Faith & International Affairs: Jim Wallis’ Politics — or Lack Thereof. Marshall's paragraph below is worth rereading:

Obviously, no popular book should be weighed down with ponderous theological reflection, but it should show some sign of having considered such reflection. For example, Wallis writes, “The place to begin to understand God is with the prophets.” There is no wisp of an argument justifying this unusual contention. He never asks why the Bible does not begin with the prophets, but with Genesis. He never mentions that the majority of Christian reflection on politics has begun with Genesis. He never carefully relates what the prophets say to the Torah, hence acknowledging that they challenge their rulers on the basis of God’s law, not on their own feelings of injustice. Maybe most of the church has been wrong for two millennia on how it addresses politics; it has certainly been wrong on other things. But Wallis never says why. He simply asserts a novel doctrine as indubitable fact.

This critique seemed obviously right to me when I read it. Of course the prophets were calling the people of Israel back to obey God's law. How could anyone doubt it?

Since reading this review, however, I've come to wonder whether there might be something else behind Wallis' "unusual contention" — one related to some of the more contestable assumptions of modern biblical scholarship. Since Julius Wellhausen and others articulated the Documentary Hypothesis on the origin of the Pentateuch more than a hundred years ago, it has generally been thought that the first five books of the Bible were written long after Moses. Indeed there are indications of later authorship embedded in the text itself (e.g., Genesis 36:31–43, Deuteronomy 34:5–10), as Spinoza pointed out already in the 17th century. 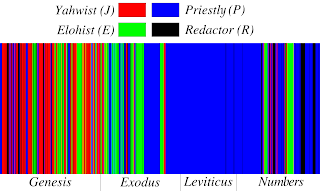 The Documentary Hypothesis ascribes the bulk of the Torah's legal code to the priestly source (or P), who ostensibly wrote around 500 BC during the Babylonian exile. Deuteronomy is similarly thought to have been written around the time of King Josiah, who is assumed to have instructed Hilkiah to "find" this in the temple to justify his reforms (2 Kings 22). These late dates are crucial because they imply that the law, so extolled in Psalm 119, was written well after such prophets as Isaiah and Amos had railed against the wickedness and injustices committed by the peoples of Israel and Judah. If so, then perhaps there was no actual law at that time to which the prophets could refer their hearers. Yet the prophets managed to demand forcefully that the people do justice, especially to the widow, the orphan and the sojourner — something that came to resonate with the people who codified these precepts a century or two later.

It is entirely possible that I am off base here, but I do wonder whether the Documentary Hypothesis might in part account for Wallis' "novel" approach of beginning his discussion with the prophets. If, on the other hand, one accepts the tradition that the bulk of the material in the Pentateuch is Mosaic in origin, one is more likely to start one's reflections on "God's politics" where the Bible itself starts: with Genesis.

Crossposted at First Things: Evangel
Posted by David Koyzis at 12:30

You should also consider the role of oral tradition. The law need not have been articulated in writing to have been alive and well in Israelite culture. And a prophet does not need to be a scribe in order to prophecy, especially in a pre-literate culture.

Jonathan, do not read me to exclude the possibility that the law was handed down orally. I don't think we will ever know for certain whether the law outside of the Decalogue existed in written documents before the texts we have were composed. But I don't see any grounds for ruling out the possibility either.

My larger point is that there must have been a law to which the prophets could appeal, whether in oral or written form. Given my knowledge of the history of legal systems in the west, my own view is that for the ancient Hebrews the law probably consisted of both written and unwritten elements.

In any case, Dr.K, this is an excellent hypothesis. I suggest someone ask Wallis if Dr.K is right!

My point is that the Israelite populace, as a whole, was unlikely a literate culture. Literacy was the domain of an educated elite. Israelites did not have bibles on their bed tables, as we do. Prophets like Elijah, Elisha or Samuel did not prophecy with their pens, but with their lips. Prophecy was orated, a tradition that Jesus himself continued during his ministry.

Given this, why not point to the prophets as a source of understanding about God? Writing, as an invention, emerged from a long-standing oral tradition, and it was the domain of prophets to maintain such a tradition. That later, literary traditions placed Genesis at the beginning of the bible does not imply that our understanding of God must rely on this editorial decision.

"Given this, why not point to the prophets as a source of understanding about God?"

Of course the prophets were a source of understanding about God, yet they were by no means delivering a message independent of the Torah. Rather, they were reiterating Torah at God's command. There is a good reason why Genesis is placed at the beginning of the Bible: it contains the beginning of the redemptive narrative that ends in the Revelation. Start with the prophets if you will, but they themselves point back to something much earlier.

I might add that the scholarly consensus seems to be that the Israelites as a whole were more literate than the surrounding peoples.

What, then, before the Torah? You seem to suggest that a written record (the Torah) prefigures the oral tradition of the Israelites. Are you suggesting that the text precedes the tongue? If so, this would fly in the face of what we know about the history of the invention of writing. Which is to say, what were the Israelites doing before they became a literate culture? Or do you believe they always were??

Would it not make sense to assume that the Torah, like the gospels, is a written account of an earlier, orated tradition?

For instance, if the Pentateuch is Mosaic in origin, the starting place is Moses - not Genesis. Moses was not present for any of the events described in Genesis. Following the Mosaic hypothesis, where did Moses acquire these stories? I would suggest he acquired them from an oral tradition of sorts. That being said, a Mosaic origin only points to Moses as the origin of the Torah, not Genesis.

Only an Adamic origin could place Genesis at the beginning...

Jonathan, according to Exodus some form of the law was engraved on stone tablets by God and given to Moses. So, yes, it seems that in its skeletal form, perhaps consisting initially only of the Ten Words, the written law preceded its oral transmission. The detailed case law that comes afterwards may have been an elaboration of the principles found in the Ten Words, which may have been transmitted orally before being codified. But this can only be educated speculation, based on our general knowledge of how other legal frameworks have developed.

Does Genesis contain material much older than Moses? Well, I think the answer to that would obviously be yes.

Thanks, Gregory, for the link to Gerhardus Vos' book. I'll have to take a look at it.

Cain, in murdering Abel, seemed to recognize a law at work (hence the concealment of corpse). Moses, too, sought to hide the corpse of the Egyptian he murdered.

Clearly, a law does not require stone and chisel in order to be a law.

No, of course not. I never said it did.

A law does, however, need to be promulgated in some way, however.

The promulgation of a law may also manifest itself in a popular consensus that a particular law is in effect irrespective of whether it is written. This is certainly the case with traditional customary law which is not the product of a legislative will.

That's right. I didn't intend to limit promulgation to a narrow definition.