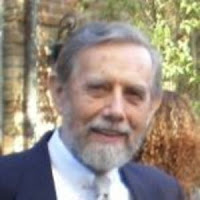 Edward Alfred Goerner was longtime professor of Government and International Studies at the University of Notre Dame, and I was privileged to have him as my PhD supervisor more than 25 years ago.

The first thing one noticed about Goerner was his flair for the dramatic in both mannerism and dress. He was born in Brooklyn, but his speech was closer to the now fading Mid-Atlantic English once associated with Hollywood and the New York stage. Many Domers will recall seeing him regularly walking from his home just south of campus to his office or to Sacred Heart Church, wearing a cape rather than the usual overcoat. When he read the scripture lesson in the liturgy with his distinctive resonating voice, he brought something of the Shakespearean theatre to the task at hand.

Goerner was the consummate undergraduate teacher, whose dynamic paedagogy had an inevitable impact on my own. He began each class session with the same prayer: "Send us, O Lord, your Holy Spirit, among whose gifts are wisdom and understanding." He would then proceed to lecture on the finer points of mediaeval political theory or on the three books he would assign to his introductory undergraduate students: Hobbes' Leviathan, Rousseau's Social Contract and Plato's Republic. I owe my own respect for these classic texts to his teaching, and I have tried in some fashion to pass this respect along to my own students.

Goerner did not publish as prolifically as some of his colleagues. His written works included Peter and Caesar and two edited volumes. There was also his two-part essay in Political Theory weighing whether Thomas Aquinas' was a natural virtue or natural law thinker. (My own sense is that he was both, but that's something for another post.) Yet he had a considerable influence on the people he taught, myself included. I have my own students reading primary sources in political theory, as did Goerner, reflecting his obvious debt to the late Leo Strauss, under whom he had studied at the University of Chicago.

Although I cannot say that I was personally close to him, I found him most encouraging of my academic interests, especially the comparison of Roman Catholic social and political teachings with their Kuyperian Calvinist counterparts, a subject that found its way into the final chapters of my own Political Visions and Illusions. I had not seen him in over two decades, but I would occasionally hear from him in the intervening years. A few years ago he wrote to recommend Rémi Brague's The Law of God, which I promptly purchased and read, agreeing with his assessment of its significance. Most recently he had written me after seeing my name on this document, which had been spearheaded by one of my former Redeemer students.

I was further privileged to pass along to him another of my former students, whose dissertation on John Rawls he would supervise. We thus managed to share in the education of a future Christian scholar in political science.

May Edward Alfred Goerner rest in peace until the resurrection.
Posted by David Koyzis at 11:34