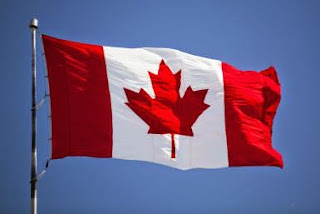 At first glance a flag would appear to be little more than a piece of fabric lending a hint of colour to our lives and activities, especially those touching on politics and government. But of course it is considerably more than this. A flag can be a powerful symbol of the very fabric of a nation’s common life. To shift the metaphor, it often functions as a glue to hold a country together through triumphs and adversities alike.

For virtually all of its first century of existence, Canada did not have its own flag. From 1867 until 1965 we used either the Union Jack or a series of Red Ensigns with the Union Jack in the upper hoist, that is, the top left quarter, of the flag. The fly, that is, the half of the flag farthest from the pole, initially carried an increasingly busy combination of the provincial coats of arms and, after 1921, a much simpler Canadian coat of arms. Moreover, the Royal Canadian Navy used a Blue Ensign similar to the current flags of Australia and New Zealand. That made for three alternative flags, none of which precisely enjoyed official status.

These flags appeared to many people to indicate that Canada was simply one more self-governing territory in the far-flung British Empire and Commonwealth. Only its coat of arms distinguished Canada’s Red Ensign from those of Bermuda and the Isle of Man. Yet into the 1960s many Canadians continued to feel a sentimental attachment to these flags, including, most notably, Conservative Prime Minister John Diefenbaker. But when Lester Pearson took his place in 1963, he moved quickly to develop a new flag for a country thought to have come of age. While heraldic expert John Matheson wanted a simple flag consisting of three connected red maple leaves on a white field, Pearson wanted two vertical blue stripes added on either side.

Eventually, of course, after many possible designs were submitted and considered, the Red Ensign was lowered and our current flag raised on Parliament Hill on the 15th day of February 1965. Since then we have had half a century to become accustomed to this familiar national symbol, and most Canadians have never known any other. Young people hiking across the globe have long stitched a maple leaf flag to their backpacks to identify themselves as Canadians and are instantly recognized as such. Although I was not especially young at the time, I did the same thing while travelling in the eastern Mediterranean two decades ago.

Having grown up in a country with a strong sense of national identity, I know from experience the symbolic importance of flags. Even if the American national anthem is not particularly singable by people with ordinary vocal abilities, its subject matter is dear to the hearts of Americans everywhere. The Star-Spangled Banner yet waves o’er the land of the free, and Americans would not have it any other way.

In the public elementary schools of my childhood, we pupils would start the day pledging allegiance to the flag with our right hands over our hearts. Anti-war activists in the 1960s severely miscalculated the impact on public opinion of their flag-burning protests. While most Americans had no great confidence in their leaders’ military efforts in Vietnam, they were thoroughly alienated from anyone who would desecrate the flag. Since then there have been sporadic, if unsuccessful, efforts to amend the Constitution to prohibit such disrespectful treatment of the stars and stripes.

It is difficult to imagine Canadians taking similar offence at someone damaging their flag. Yet if we are not exactly fervent about it, we are by now thoroughly comfortable with it, viewing it as a mostly unremarkable fixture on our national landscape. Far from exciting or inspiring, the maple leaf flag goes largely unnoticed. Until, that is, we return to this country from travels abroad, and then we find that the flag is still there, ready to welcome us home before once again receding quietly into the background of our collective consciousness.

We may yet encounter the occasional holdout for the old Red Ensign, such as the owner of the building at the corner of Locke and Aberdeen here in Hamilton. (Google streetview will confirm this!) But for virtually everyone else, our no-longer-new flag has had fifty years to secure at least a modest place in our hearts, and that is something worth celebrating.

David Koyzis is the author of Political Visions and Illusions and We Answer to Another: Authority, Office, and the Image of God. He teaches politics at Redeemer University College.
Posted by David Koyzis at 09:39