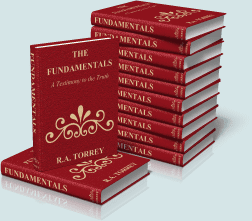 
As a result, a concerted effort was begun to forge an alliance among confessional Christians in several protestant denominations, culminating in the publication between 1910 and 1915 of The Fundamentals: A Testimony to the Truth, consisting of 90 essays bound together in several volumes. The 64 authors were a diverse lot, including B. B. Warfield of Princeton Seminary; C. I. Scofield, whose Scofield Reference Bible disseminated dispensationalism far beyond its original home in the Plymouth Brethren; the Rev. William Caven of Knox College, Toronto; the Rev. James Orr of the United Free Church College in Glasgow; Canon G. Osborne Troop of what was then called the Church of England in the Dominion of Canada; and many more besides.

While the term fundamentalism is nowadays almost always used in a negative sense to dismiss a particular group as narrow and ingrown, the original fundamentalist movement was a broad effort to defend the fundamentals of the faith, such as the Virgin Birth, the Deity of Christ, the inspiration of the Bible, and the unity of Scripture against the fragmenting onslaughts of historical criticism. Any movement bringing together Anglicans, Episcopalians, Reformed Episcopalians, confessional Presbyterians and dispensationalists can scarcely be labelled narrow and exclusive. In fact, the original fundamentalist movement, like its neo-evangelical successor after the Second World War, would be better characterized by this well-known maxim: “in essentials, unity; in doubtful matters, liberty; in all things, charity.” Over the decades many people were in the habit of describing a congregation or denomination as “fundamental” if it adhered to these fundamentals of the faith shared by all Christians throughout the centuries.

This effort to build a broad coalition of believers from a variety of traditions generally avoided such potentially divisive doctrines as baptism, the Lord’s Supper, predestination, free will and the millennium (Revelation 20). These were judged less significant than the need of the hour, which was to confront head on the growing secularism in the churches. This makes it somewhat ironic that, a century later, the word fundamentalism is associated with a variety of unlikable groups, including outright terrorists.

Then came the evangelicals. After the Scopes trial of 1925, fundamentalism came to be associated with obscurantism, though a few groups jealously held on to the label, including the independent Baptist congregation where my mother came to a saving knowledge of Jesus Christ in her late teens. Carl F. H. Henry and the Rev. Billy Graham were associated with this new movement, and Christianity Today became its flagship publication. So powerful was this evangelicalism after 1945 that it would eventually come to supplant the rapidly fading mainline protestant denominations four decades later. Evangelicalism as a label had the virtue of plugging into more than one historic movement, including the 18th-century evangelical revivals in the Church of England, the Wesleyan Methodist movement, continental European pietism and, of course, the Reformation of the 16th century. However, its chief defects were its lack of a robust ecclesiology and its emphasis on personal experience, which, while otherwise laudable, would eventually erode the lines between evangelicalism and liberalism, especially after the turn of the 21st century.

Many of us were proud to claim the evangelical label, because of the obvious reference to the gospel of Jesus Christ. (As Gus Portokalos would tell us, evangelion is a Greek word!) However, increasing numbers of Christians are now coming to reject the evangelical label, because of its association with a certain political commitment. Indeed, those still willing to wear the label are troubled that so many of their co-religionists seem to rank political ideology above the obvious ethical implications of their own faith. Whether these are genuine evangelicals or merely “court evangelicals” is subject to dispute. Wherever the truth lies, some high profile Christians have decided they can no longer describe themselves as evangelical.

It is true, of course, that some labels have been discredited through their abuse, making it virtually impossible for right-thinking people to wear them. (How many good and respectable people were sympathetic to national socialism before 1933?) However, I myself have become wary of discarding an otherwise perfectly good label for fear of association with those people, whoever they might be. Given that we are all sinners standing in need of God’s grace, we might do better to look into our own hearts to determine whether we are worthy to be called by the name of Jesus Christ and his gospel of salvation. On our own strength we are not worthy, of course. That is precisely why we flee to Christ to find our true identity. It cannot be found in political parties or ethnic subcultures. It cannot be found in our own desires and aspirations, which, however legitimate they might otherwise be, are always caught up in the cosmic struggle between sin and redemption.

Labelling is a fickle enterprise. People often label others to discredit them. We label ourselves and expect people to respect those labels, which, of course, they may not. Often the labels do not endure for the long term, eventually being replaced by others that will serve for a time but probably not forever. I am personally willing to call myself a fundamentalist in the original sense, an evangelical, a Reformed Christian or even—tongue-in-cheek of course—a Byzantine-Rite Calvinist. But above all I am a follower of Jesus Christ, and it is by his name over all other names that I wish at last to be called, “for there is no other name under heaven given among men by which we must be saved” (Acts 4:12).
Posted by David Koyzis at 20:55