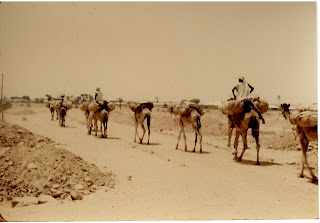 In November of 1950, when he was 22 years old, my father travelled with a camel caravan from Kano, Nigeria, where he was living at the time, to Timbuktu, then in French West Africa. He seems to have stayed in the latter city through January of 1951, apparently growing a beard at a time when beards were far from fashionable. Timbuktu is a fabled city at its height during western Europe's late Middle Ages, when it was a centre of learning and commerce in the heart of Islamic west Africa. Today it contains a huge number of ancient manuscripts which residents have kept safe from invaders for centuries, most recently during the troubles of the second decade of the 21st century. It's still a largely Muslim city, with its glory days behind it. But my father was determined to see it, recounting his experiences in the form of a lengthy epic poem, mostly in a very rough iambic tretrameter in 660 quatrain stanzas in English. The accompanying photograph is one he took during his trek through the Sahara.

My father died in August of last year at the good old age of 92.