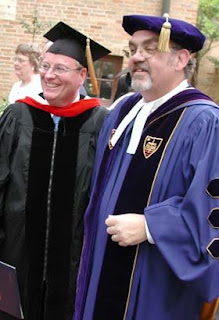 I have recently learnt of the death of a friend whom I knew during our graduate studies at Notre Dame in the 1980s. I no longer recall exactly how Stan Hall (shown at left in his Notre Dame regalia) and I met, but I believe it was through a mutual friend who was studying in the same theology department at the university. Stan was an ordained Presbyterian minister, and we quickly discovered we had a common love of Reformed liturgy, which, while merely an avocation for me, was precisely what he was preparing to teach professionally. We further had similar convictions that contemporary efforts at "dressing up" the liturgy and livening worship missed the point. His convictions are well summed up in the eulogy delivered by David W. Johnson:

He was convinced that worship should honor and express the Godness of God, and that anything called “worship” which allowed the fads of the moment or the clichés of the crowd to obscure the Godness of God was a perverse travesty of what worship ought to be. He was also convinced that a congregation is not an audience but a community, and therefore worship should be a community act and not a performance. His whole outlook on worship and ministry flowed, I think, from these two convictions. . . .

These two convictions do not isolate the church from the world. But they do require that the church be the church in the world, the church that is apt to offend even while it invites, because it tells the truth and exposes the sham. And these convictions insist that the movement of the Spirit, and therefore of the church, starts with the word, the font, and the table, and then goes out into the world equipped with grace, truth, and love. Those who plan worship around marketing surveys and trend analysis found Stan to be a very frustrating person, for he thought that such things did not honor the priority of Spirit, Word, font, and table.

He expressed great interest in my own versifications of the biblical psalms and canticles and used liturgical responses I composed at the congregation he was pastoring in Granger, Indiana. My own versification of the Song of Jonah became the seventh "reading" at an Easter Vigil service he led at that church.

I have been moved to read the reminiscences left by his colleagues and students at the memorial website at Austin Presbyterian Seminary, where he was the Jean Brown Associate Professor of Liturgics and Homiletics. It is rather remarkable to see the positive impact he had on so many people during his not quite twenty years there, especially given that I knew him before any of this had yet occurred. Nevertheless, everything said about him, e.g., his no-nonsense lack of sentimentality and his curmudgeonly manner, was true of him even then.

The most memorable thing Stan told me was that he thought most protestant liturgy could be summed up as "one damn thing after another." I have another memory of sitting with him and other theology grad students in the public cafeteria at Notre Dame. He delighted in telling them he was a "fundamentalist" and watching their discomfort. On yet another occasion in one of the student cafeterias, I saw him crush a bothersome fly with his thumb and then go back to eating as if nothing had happened.

Stan was unsentimental even about his own impending death, according to his friend, the Rev. Scott Black Johnston:

Knowing that the disease he had would one day claim his life, Stan went online a few years ago and located a group of Trappist monks with whom he was familiar in South Bend, Indiana—monks who support their Abby by selling simple caskets built out of pine and oak. Stan submitted his measurements to the monks, and within a couple of weeks UPS delivered a custom-made, pine box to the seminary. Unwrapping it, my friend set it up in the corner. As you might guess, most people who walked unprepared into his office felt pretty uncomfortable. First year students often left shaking their heads. Why would a person, even a person who is dying, want to spend every day working in the presence of a coffin? Stan, however, seemed genuinely amused by the students’ fretfulness.

Almost exactly a year ago, in a coffee shop in Austin, I asked my friend what the pine coffin was all about. Instead of speaking in maudlin terms about his illness, Stan began to describe for me the tradition (passed down through the centuries) whereby Trappist monks construct their own coffins, their own wooden boxes for burial. They do so, Stan said, as a prayer to God. “What sort of prayer?” I asked. Oh, he said, the monk prays that he not be tempted to live in fear for his mortal life, but that he be given the strength [to] live each day as grace—as if he had been granted a precious gift from God. His words reminded me of a prayer that Presbyterians often say at funerals. “Help us to live as those who are prepared to die. And when our days here are ended, enable us to die as those who go forth to live, so that living or dying, our life may be in Jesus Christ our risen Lord.”

We will miss Stan and look forward to seeing him again at the resurrection. In the meantime something of him will continue to live through the many people he influenced during the time God gave him in this life.
Posted by David Koyzis at 20:48