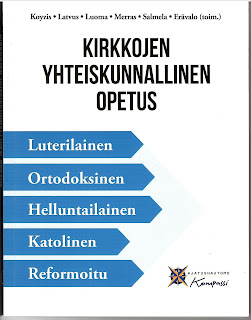 Kompassi is the think tank of the Finnish Christian Democratic Party, a member of the European People's Party group in the European Parliament. I had hoped to visit Finland last month, after a stay in Germany, but, like so many other events planned for this year, the COVID pandemic prevented it. The address I had planned to deliver has been published in full in a book produced by Kompassi this month, Kirkkojen Yhteiskunnallinen Opetus (Social Teaching of the Churches). Included in this volume are chapters on how the different Christian traditions address social and political matters. Given Finland's historic Lutheran roots, the Lutheran tradition is treated first, followed by the Orthodox, Pentecostal, and Catholic. I wrote the chapter on the Reformed tradition, which is all but unknown in that country. Here is a summary from this article about the event translated into English by Google translate:

In his video greeting, David T Koyzis, a Canadian professor who wrote a section on the Reformed Church, described how the first Christian Democratic Party was founded in the Netherlands in the late 19th century based on Reformed social education.

Although I was unable to attend the event, I did contribute a video summarizing the contents of my address, which I have set to start at the point where I come in.

Although I have deep Finnish roots on my mother's side, I can understand almost no Finnish whatsoever. Closely related to Estonian and distantly related to Hungarian, Finnish is a Finno-Ugric language. Google translate does a passable job of rendering these pages in English, although it does much better with Indo-European languages. Readers who do know Finnish are invited to set the video to the beginning to hear the entire conference.