How does politics shape the way we see the world? 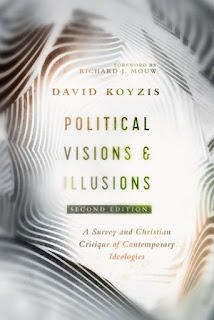 Some weeks ago Andrew Bertodatti, of the Southern Baptist Convention's Ethics and Religious Liberty Commission, interviewed me on the subject of my Political Visions and Illusions: How does politics shape the way we see the world? This was posted yesterday. Here is an excerpt:

How do you suggest believers approach public justice? In your view, what is the source of our disagreements about what justice requires?

There are two sources of our disagreements. First, we may disagree on basic principles of justice, in which case it may be that we have been negatively influenced by the redemptive stories told by the secular ideologies I treat in my book. Perhaps we have become Christian socialists, or Christian nationalists, or some such. A major reason for my writing this book is to move believers into examining themselves to see whether they are in fact accepting an unbiblical redemptive narrative and whether this might be adversely affecting their approach to political life.

But second, even if we were all agreed on first principles, we would still differ on how they should be applied in particular circumstances. In other words, we would disagree on prudential grounds on the wisdom of this or that specific policy. We needn’t regret such disagreements, because debate over such matters is crucial to the policy process. If everyone simply accepted a single policy proposal without question, there is a good chance it would go badly.

I might end with a caution. Just because we ourselves are Christian believers does not make us all-wise and perfectly in tune with a biblical understanding of justice. Humility is not often regarded as a political virtue, and many of our political leaders are not generally noted for possessing it. Yet humility is needed if people are going to cooperate for political purposes and to see justice done thereby.