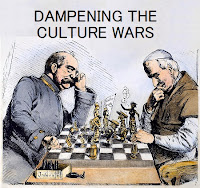 Cyprus is the third largest island in the Mediterranean Sea, located off the coast where Asia Minor turns into the Levant. It has been a crossroads of virtually all the imperial powers in the region, having been controlled successively by the Romans, the Byzantines, the Lusignan dynasty, the Venetian Republic, the Ottoman Turks, and finally the British, before receiving independence in 1960 as a member state of the Commonwealth of Nations. The population of Cyprus is overwhelmingly Greek-speaking, with the Greek presence in the island dating back nearly 3,000 years. The population has, of course, fluctuated over the centuries and is currently estimated to stand at just over 1 million. Around half a century ago, the island had around 650,000 people of whom 80 percent were Greek-speaking and Orthodox Christian, and just under 20 percent Turkish-speaking Sunni Muslim. The Turkish-Cypriot community was a remnant of the centuries of Ottoman occupation between 1571 and 1878.

In 1878 Great Britain received administrative control over Cyprus as part of the settlement that ended the Russo-Turkish war of the previous year. The first British colonial high commissioner was Sir Garnet Wolseley (1833-1913), who had put down the Red River rebellion in Canada nearly a decade earlier. From 1878 until 1914, the island's residents remained nominal subjects of the Ottoman Sultan, but when Britain entered the Great War against Turkey, she annexed it outright, lest its residents be considered enemy aliens. Cyprus became a Crown colony in 1925. My father was born there three years later and grew up in the Greek Orthodox community, although he had Turkish Cypriot friends, including a boy born exactly one year after he was. This man remained one of his best friends throughout their long lives.

Cyprus was affected by the ethnic nationalisms that had spread throughout Europe in the 19th century. Two centuries ago the Greek revolution began, and it affected Greek population centres throughout the Ottoman Empire, including Cyprus. The result of this rebellion was not the overturning of Ottoman control within its vast empire, but the creation of a small kingdom of Greece at the foot of the Balkan peninsula. It was considerably smaller than today's Greece, with most Greek Orthodox Christians remaining outside its boundaries. In fact, its new capital city of Athens was a sleepy village at the foot of the Acropolis chosen by the new regime because of its heritage in classical antiquity. The major urban centres of Greek culture were Constantinople, Thessaloniki, Smyrna, and Alexandria, all of which were still under Ottoman control.

Amongst the Greek population of Cyprus there began a movement to unite Cyprus with Greece (enosis). In 1914 Britain actually offered the island to Athens as an incentive for it to enter the war on the side of the Triple Entente. But King Constantine I (1868-1923) was brother-in-law to the German Kaiser and was reluctant to take his country into the conflict. When Greece finally did join the Entente in 1917 following the King's abdication, the offer had expired and was never extended again. In 1931 Greek Cypriots launched an uprising in favour of enosis and in the process burned down Government House, the seat of the colonial governor. A referendum on enosis was held by the Church of Cyprus in 1950 in which a large majority of Greek Cypriots voted in favour. (Turkish Cypriots were excluded, and the ballot was not secret!) On 1 April 1955 the National Organisation of Cypriot Fighters (EOKA) launched a guerrilla war against the British led by General George Grivas (1897-1974). This further poisoned relations between the Greek and Turkish communities in the island. The war ended in 1959, and the island became the independent Republic of Cyprus the following year.

Naturally Turkish Cypriots were unenthusiastic about their homeland becoming part of a greater Greece in which their own minority status would be vastly diminished. In the latter stages of the guerrilla war, London invited both Greece and Turkey to play a role in the negotiations leading up to independence, with each party assuming the position of guarantor of the island's separate status. The new Cyprus Republic was given a lengthy constitutional document that claimed in some fashion to embody the consociational principles of power-sharing across ethnic, linguistic, and religious lines.

The 1960 Constitution established Cyprus as a presidential republic with the presidency occupied by a Greek Cypriot and the vice-presidency by a Turkish Cypriot, thus echoing Lebanon's National Pact of 1943. Both Greek and Turkish were to be official languages of the republic, and all government documents must be published in both. The President and Vice-President were to have a Council of Ministers of whom seven would be Greek and three Turkish. Defence, Finance, and Foreign Affairs portfolios would always go to Turkish Cypriots.

In addition to the House of Representatives, the Constitution provided for two communal chambers to supervise affairs internal to the communities. These chambers had authority over religion, education, culture, and internal civil disputes, with the power to tax the members of their respective communities. Hiring for the pubic service reserved 70 percent of positions for Greek Cypriots and 30 percent for Turkish Cypriots. The size of the republic's army was set at 2,000 men of whom 60 percent would be Greek and 40 percent Turkish. Internal security forces were also set at 2,000, with a breakdown of 70 to 30 percent.

All of this necessitated the division of the population into two electorates, with each voting for officials relative to its own community.

Unlike the National Pact, which endured 32 years, Cyprus' Constitution lasted for only three years before it fell victim to a renewed bout of intercommunal conflict in 1963 and '64. After that point, the Turkish community withdrew from the institutions of the republic and barricaded themselves within enclaves scattered throughout the island. In 1974 a series of events led to Ankara invading Cyprus from the north and dividing the island along a roughly east-west line that came to be known as the Green Line. In 1983 the Turkish Republic of Northern Cyprus was declared in the 37 percent of the island's territory occupied by the Turkish military. Thus far only Turkey itself recognizes its legitimacy. 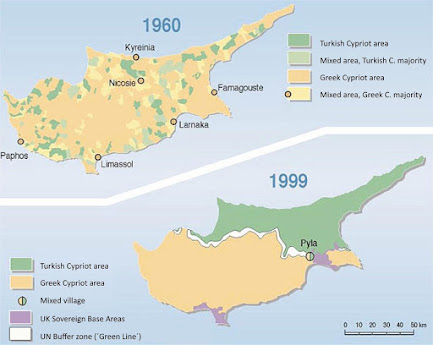 In 2004 an effort to reunite the island, in conjunction with its joining the European Union, failed when citizens of the Cyprus Republic rejected the Kofi Annan Plan. Thus the 44-year-old stalemate continues in the island, with its de facto division hardening into permanence with each passing year.

What happened? Why did consociationalism fail to work in Cyprus when it had worked elsewhere? Three factors were significant.

First, the proportion between the two communities was too lopsided. Because Greek Cypriots were a clear majority in the island with roots extending nearly 3,000 years into the past, and because the Turkish minority were a more recent ruling class imported during the Ottoman era, Greek Cypriots felt that the latter had effectively become a privileged group frustrating their efforts at democracy and self-government at a time when so many other former European colonies were achieving independent nationhood. With their majority status, Greek Cypriots had little incentive to share power with a small minority, who were, unfairly in the minds of Greeks, overrepresented in the bureaucracy and the military. This seemed to them undemocratic. The similarity to South Africa's apartheid policy further discredited this arrangement.

This problem indicates that consociationalism is more likely to work when there are at least three distinct communities, with no single one constituting a majority, a precondition absent in Cyprus.

Second, there were not enough Turkish Cypriots with sufficient education to fill the requisite quotas in the bureaucracy and military. Efforts by President Makarios to streamline the constitution and to eliminate the quotas in exchange for minority guarantees led to the violence in late 1963.

But, third, and most significant, there was a widespread sense among Greek Cypriots that their Constitution was not really theirs and had been imposed on them by Britain, Greece, and Turkey. It notably bypassed a tradition of intercommunal collaboration embodied in the Ottoman-era ethnarchy, in which the Orthodox church hierarchy represented the interests of their flock to the Sultan. Greeks and Turks had been co-operating for centuries to facilitate the island's welfare from 1571 to 1878. Had the architects of Cyprus' post-independence constitution drawn on this tradition in some fashion, they might have had more success.

The tragedy of Cyprus, in which my paternal relatives were repeatedly caught up, demonstrates that not every polity has the preconditions for a successful consociational arrangement. Nevertheless, because there was already a tradition of intercommunal collaboration between the two communities in the island, this should have been built upon and adapted to an independent democratic polity.

I need to add a postscript at this point. Relations between Greek and Turkish Cypriots at the grassroots level were fairly close in times past, with little sense of their belonging to separate nations. The rise of ethnic nationalism, especially on the Greek side, drove the two communities apart, hardening them in their new artificial identities. Two years ago I reviewed Louis de Bernières's Birds Without Wings (Vintage, 2004) (Flightless birds in history's cauldron), a work of fiction recounting the friendship between two boys in pre-Great War Ottoman Turkey, one a Christian and the other a Muslim. I found it a profoundly moving story, as it paralleled my late father's experience of growing up in Cyprus in the 1930s, in which rival nationalisms unnecessarily drove friends apart. My interest in consociationalism and my exploration of the idolatrous character of political ideologies were in part fuelled by what happened to our Cypriot relatives. I believe that hope for Cyprus lies, not in the sorts of quotas set up in 1960, but in reconciliation between two communities that never should have been driven apart.