Anthony Esolen at Mere Comments speaks his mind in Between Obedience and Obedience. His remarks are relevant, of course, to my ongoing project on authority. I especially like his concluding paragraph:

You obey, or you obey. On earth there is no third choice. The only question, ultimately, is whom. Christians are called to obey the God whose very commands set us free. The alternative is to heed somebody else, enjoy a petty and temporary license, and clap yourself in irons.

That said, I myself would rephrase what comes before this, which is a defence of hierarchy against its detractors. Yes, hierarchical thinking, in the sense of making distinctions and ordering them mentally, is inevitable. So are hierarchies of authority, which no society can live without. History is littered with failed anarchist experiments in which a self-chosen few end up calling the shots at the expense of everyone else, despite the fact that mutuality was supposed to govern their relationships and activities. To deny hierarchies of authority is to open the door to would-be messiahs taking advantage of the lack of formal structures and procedures.

Nevertheless, Esolen's defence of hierarchy needs to be qualified in two ways.

In the first place, authority itself is something possessed by all human beings. This authority manifests itself most basically in the office of image-bearer of God, which entails a general call to exercise responsibility within and over his world (Genesis 1:28-30; Psalm 8). Beyond that, authority manifests itself in pluriform ways dispersed amongst persons in their multiple offices in the communities in which they are embedded.

Take the university community as an example. The professor obviously has magisterial authority over the class, setting its agenda, choosing the books to be read, scheduling the examinations and so forth. Yet even within the class students themselves possess the authority of students, which the professor is obliged to respect. Professors and students do not possess the same authority, but it is authority all the same. These two types of authority relate asymmetrically to each other, but they do not set up a permanent relationship of authority and subordination between the professor and students, either as persons or in their respective offices. To emphasize this, I insist that my own students, upon graduation, call me by my first name. We remain the same persons, but our professional relationship has changed for good: in their case the office of student has come to an end. My office of professor continues, but not with respect to the graduated alumni.

Furthermore, if one of my current students is a part-time traffic cop, then I am subject to her authority when I enter her intersection. She and I simultaneously bear several offices that relate to each other in different ways depending on context. 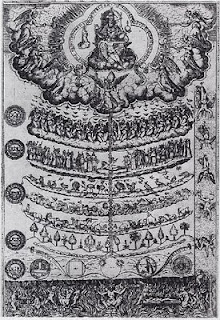 In the second place, a defence of hierarchy should not be taken to include ontological hierarchy, or the so-called Great Chain of Being of Plato, Aristotle and the neoplatonists. This conception is in stark contrast to the biblical worldview in two ways.

First and most fundamentally, it effaces the distinction between Creator and creation. If God is simply the ens perfectissimum, he is less than fully God. He may be seen to partake of something larger than himself, or the whole itself might be identified with God and its other components simply emanations from his own divinity. The resemblance to pantheism is obvious.

Second, the ontological hierarchy assumes that the lower levels of the chain differ from the higher levels in so far as the former partake more than the latter of evil, or nonbeing. As the Encyclopædia Britannica concisely puts it,

The scale of being served Plotinus and many later writers as an explanation of the existence of evil in the sense of lack of some good. It also offered an argument for optimism; since all beings other than the ens perfectissimum are to some degree imperfect or evil, and since the goodness of the universe as a whole consists in its fullness, the best possible world will be one that contains the greatest possible variety of beings and so all possible evils.

Here the legitimate diversity of God's creation is identified with the proliferation of multiple evils, even if they are ordered to a higher good. The beasts of the field are less perfect versions of us. We ourselves are imperfect versions of God himself.

This simply will not do. Scripture affirms that God created the diversity of the cosmos and pronounced it good. There is no hint that creation is an emanation from God himself or partakes of his essence. Moreover, sin is not nonbeing; it is living outside of communion with God and in defiance of his word. Sin has marred this communion. Salvation consists, not in our becoming God, but in receiving from him the restored wholeness proper to his image-bearing creatures.

Therefore we need not fear hierarchies of thought or hierarchies of authority, which are inevitable in any and every social context. These are best formalized and regularized than denied or dismissed. But we should certainly repudiate any hint of ontological hierarchy, which is a distortion of our relationship with God, each other and the rest of his creation.
Posted by David Koyzis at 15:11