This is not officially part of my series on authority, but I thought I should take this opportunity to mention a book I've been reading, titled Civilizing Authority: Society, State, and Church, edited by Patrick McKinley Brennan. It contains a number of essays worth noting, especially "Society, Subsidiarity, and Authority in Catholic Social Thought," by Russell Hittinger, who defines subsidiarity in a remarkably (but, one assumes, inadvertently) Kuyperian direction; and "A Rock on Which One Can Build: Friendship, Solidarity, and the Notion of Authority," by Thomas Kohler, who comes strikingly close to Dooyeweerd's modal analysis. But the most intriguing essay comes from J. Budziszewski, who writes on "How a Constitution May Undermine Constitutionalism."

Two years ago in Ottawa I met a scholar who has spent much of his career analyzing the growing power of Canada's courts since patriation and its impact on our political system as a whole. Having recently visited Australia, I had noticed that something similar has occurred in that country, despite the absence of a justiciable bill or charter of rights. I asked this scholar why the expansion of judicial power appears to be so universal in western, and particularly English-speaking, democracies. His answer didn't stick with me, but I seem to recall that he was as puzzled as I at the underlying reasons for this phenomenon. 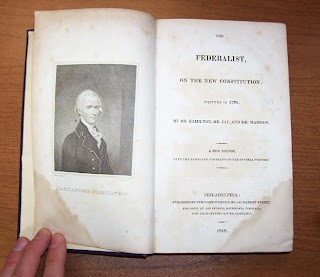 Budziszewski has now offered a compelling response, with a focus, to be sure, on the American context, but with implications for other federal systems as well, including those of Australia and Canada. Students of American government are generally familiar with the Federalist Papers, or The Federalist, a series of essays written, under the pseudonym Publius, in defence of the new federal constitution by James Madison, Alexander Hamilton and John Jay. The best known of these are numbers 10 and 51, the latter of which defends the internal checks and balances within the federal government itself.

By contrast, few Americans are aware of the Anti-Federalist Papers, written pseudonymously by opponents of the new constitution, one of whom took the name Brutus. Budziszewski focusses on numbers 11 and 12, where the author sets forth his reservations over the expansion of judicial power and its concomitant tendency to expand the legislative power as well. In particular, Brutus

recognizes that a written constitution is not merely a statement of political ideals, but a legal instrument. It is all well and good to say that the three branches [legislative, executive and judicial] shall be coequal, but the courts normally interpret legal instruments. A differently drafted legal instrument might have distributed the power of interpretation among all three branches. It might have identified particular respects in which the legislature, the executive, and the judiciary are each interpreters of the constitution. What the Constitution actually does, argues Brutus, is just the opposite. Rather than distributing the power of interpretation, it concentrates it in the courts. To make matters worse, he holds, the language by which this is done encourages judges to exercise this concentrated power of interpretation in extravagant ways that bear but a distant relation to what the Constitution actually says (p. 148).

It is a truism that the American founders fragmented government and distributed sovereignty among the three branches to prevent any one of them becoming tyrannical. This is what Americans have been taught for generations, the assumption being that the founders had a solid grasp of human nature and the tendency of people to compete with each other for various social and political goods. From my own American upbringing, I recall that Christians in particular viewed the founders as fellow believers who understood the sinfulness of man and thus placed checks in their proposed constitution to counteract its effects. This sounded good in theory. The founders were apparent realists in their estimation of human nature, while liberals and socialists of various stripes had an overly rosy view of man's potential.

Yet what if the founders too were working with a defective anthropology? Could they have imbibed a modified Hobbesian anthropology, perhaps by way of John Locke? Hobbes holds that human beings are creatures of restless desires and, left to their own devices, ruthless competitors for the means of survival. Hobbes famously argued that the prepolitical state of nature is characterized by a war of all against all. Locke, of course, could not bring himself to follow Hobbes' logic in its entirety, admitting only that the state of nature could degenerate into warfare if conditions were favourable. Hence the need for civil government to preside over this competition and to make it more manageable and less potentially deadly. As for government itself, its members are as prone as everyone else to compete for valued goods. Hence, following Montesquieu, the founders adopted a constitutional framework that would divide sovereignty amongst the three branches and between federal and state governments.

So many Americans have accepted this reasoning that they have difficulty imagining an alternative. Here is where, taking Brutus and Budziszewski as a springboard, I would make the following argument, which I believe is more congruent with a biblical worldview: the line between good and evil does not run between co-operation and competition, as so many have believed, but through each. Our own socialist New Democratic Party began life as the Co-operative Commonwealth Federation, on the assumption that economic co-operation is better than the competition characteristic of capitalism. Yet those exalting solidarity over individuality ignore the fact that even organized crime is characterized by a certain solidarity amongst its perpetrators.

I would argue instead that both competition and co-operation have their legitimate places in human life. Competition can aim at narrow self-interest, but it can also be an incentive to service to others, as, e.g., in a charitable fund-raising marathon or even a large manufacturing enterprise supplying a needed good to the public. Similarly co-operation may be for the good of all, as socialists assume. But it can also be a means of collusion for purposes of price-fixing and other forms of corruption. Might the American founders have missed this element of human nature in their ostensibly "realistic" view?

Thus it may be that the expanding power of the courts has come with the blessing of the legislative branch. Here's Budziszewski again:

Another fact bolstering Brutus's case is that whereas federal legislators periodically face the electorate, federal judges don't. This makes Congress much more risk-averse than courts are. Rather than resenting the judiciary for taking hot-button issues out of its hands, the legislature may be relieved and grateful that someone else has made the decision for them (p. 153).

This is a conclusion I came to some time ago with respect to Canada. Since 1982 our courts have been making decisions that are increasingly imaginative and even in open conflict with the intentions of the drafters of the Constitution Act, 1982. We know this because, unlike the American founders, most of the players in the patriation drama are still very much alive! Given our convention of responsible government, a sitting government is reluctant to make decisions of a controversial nature. It is easier to leave such decisions up to the courts, who do not have to face the people. The Supreme Court's Reference re Québec secession is in many respects an ingenious decision that gave something to both sides and helped to prop up the federalist cause in Québec. Nevertheless, one would be hard put to demonstrate that the ruling was based on a close reading of our Constitution Acts, which nowhere mention secession.

Here in Canada we have Section 33, the Notwithstanding Clause, that legislators can invoke to override judicial decisions based on Sections 2 and 7-15 of the Charter of Rights and Freedoms. Yet over the past quarter century few legislatures, with the exception of Québec's National Assembly, have been willing to invoke it. I believe Budziszewski, drawing on Brutus, has now given us a credible explanation for this reluctance.

Incidentally, the copy of The Federalist shown above is from my personal library. It is a rebound edition dating from 1818, when two of the authors, James Madison and John Jay, were still alive.
Posted by David Koyzis at 16:22