This is a follow-up to my post of last month and an effort to respond to some of the points made by Tony Esolen and Daniel D. De Haan in the comments. De Haan asks: "But do you mean to say then, in agreement with Esolen, 'that obedience and genuine authority are inseparable' yet require qualifications as diverse modes of authority are commensurate to diverse modes of obedience and/or obligation?" 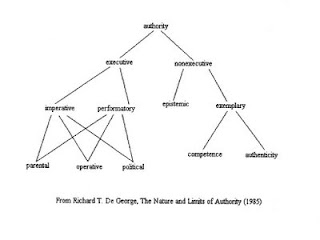 Some of De Haan's other comments are relevant to the finer points of theology, a field that, admittedly, is not my own. However, I will focus on two issues. First:

The Creator God, as the sole Creative Cause, must possess in perfect simple identity the vast array of contingent perfections found throughout creation. If not we must ask who created them if not the Creator? And how could He Create such created perfections if they were not already entitative perfections of Himself.

The entire paragraph in which this appears strikes me as a case, not only of subjecting God to the laws he has posited for his creatures, but of claiming to know God's essence, which goes well beyond what he has chosen to reveal to us in Scripture. To be sure, God has accommodated himself to us, communicating in creaturely ways we can understand. However, for a mere human being to assert what God "must possess" in himself seems rather presumptuous. At the very least one ought to be careful in making such assertions in recognition that there are limits to what God has chosen to reveal about himself to us.

Second, there is this from David Deavel: "But there are various other views of ontological hierarchy that are compatible with a Christian doctrine of creation." This is De Haan's view as well.

My response begins with acknowledging that God's creation is complex, containing an amazing diversity of things, each with its own proper place in the whole. One of the characteristic errors of modern thought is reductionism, i.e., the tendency to reduce this complexity to one or two elements. For example, Darwin believes he can account for biological complexity (and perhaps the rich variety of human cultures?) in terms of the single mechanism of natural selection. Similarly, Marx reduces the fulness of history to an economically-based class struggle.

By contrast, I would argue, following Dooyeweerd and others, that no aspect of created reality can be elevated to primary status. Rather each aspect has its own appointed place and cannot be reduced to another. The aesthetic cannot be reduced to the economic (contra Marx) or to the biological (contra Darwin). Similarly the political cannot be reduced to the economic, a point made by Sheldon S. Wolin, Hannah Arendt, Sir Bernard Crick and others. The only sense in which these aspects might be seen as hierarchical is that the "earlier" aspects are foundational for the "later" ones. Biological life is necessary for sensation, which is in turn a precondition for thinking logically, itself a precondition for making aesthetic judgements.

My questions to De Haan and Deavel are as follows: Why would they deem it necessary to envision this diversity of created reality as hierarchical? What would it mean for a thing to be higher or lower on the ontological ladder relative to something else? Is their conception of hierarchy different from mine and Dooyeweerd's, as indicated in the previous paragraph? Or do they envision something else? Does diversity itself imply hierarchy?
Posted by David Koyzis at 10:10