Innes: Christ and the Kingdoms of Men, a review 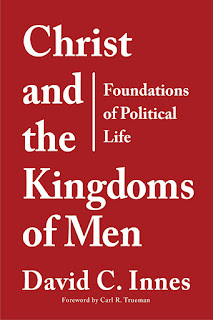 Voegelin View has published my review of David C. Innes, Christ and the Kingdoms of Men. Innes teaches political science at the King's College in New York, and I've known him for several years, although we've not met personally. This is a very fine book, with one significant flaw: the lack of an in depth treatment of justice, which I believe illustrates the limits of political theology as a discipline. An excerpt from my review:

If political theology begins with Scripture, political science as an empirical discipline begins with the raw data of political life. To be sure, political science is not religiously neutral, and the practitioner does not and cannot park her ultimate beliefs on the sidelines before plunging into the subject matter. Nevertheless, the empirical nature of the discipline means that one must attend to the ways governments actually function in the real world. Every government balances the various interests within its jurisdiction. Even the political realist preferring to banish justice to the separate realms of morality and religion will speak of a balance of powers—language by which justice sneaks in the back door. Weighing interests in the balance is quite simply what governments do. They may get the balance wrong in small or large ways, yet the jural task of government—of rendering to each his or her due—is always present, if sometimes in distorted form.

What I most like about the book will probably spark the most controversy,

namely, Innes’s argument that government has an obligation to encourage and maintain the spiritual and moral environment of a polity, removing impediments to the cultivation of civic virtues. Although I might put the matter differently, I’ve become increasingly convinced in recent years that political culture is of utmost importance for the functionality of a political system. While it includes such tangible elements as flags and other symbols, for the most part it consists of intangible attitudes towards political life rooted in what Walter Lippmann calls traditions of civility. Attempts to create constitutional government de novo will likely fall flat in the absence of such traditions.

Innes recognizes that government cannot pretend to be neutral with respect to the maintenance of such traditions, and I believe he is correct.

I am happy to report that Innes has read my second book, We Answer to Another, and cites it favourably with respect to the connection between authority and office, and the sphere of personal authority properly held by the individual. Do read the book and judge for yourself its merits.