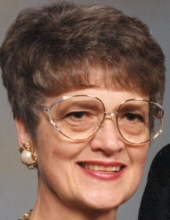 Barbara Martha Calvert (née Finstrom), born 5/18/1935, died 12/29/2020. Born in Brooklyn, NY, Barbara Finstrom was raised in a Scandinavian sea-faring family which emigrated to the United States in the early part of the 20th century. Barbara recalled childhood days roller skating on the sidewalks of Brooklyn, attending Public School 102, and worshiping at the local Episcopal Church. She later attended Fort Hamilton High School where she won awards in mathematics and vocal performance.

She later worked at Macy’s and as a secretary for Pfizer in Manhattan where she met Roy L. Calvert (1925-2019). They were married on February 12, 1956. No matter where she lived, she always proudly said she was from Brooklyn when asked. Most recently, she resided in Downers Grove, IL, and Hillsdale, MI.

Barbara’s parents, Borghild Alvilda Finstrom and Axel George Finstrom, who served as a Captain in the Merchant Marine in World War II, preceded her in death, as did her older brother George Finstrom.

She will be remembered for her hard work and determination, her love of family, her stellar homemaking, and her eye for detail, particularly during the many years she spent as Editorial Coordinator for Today’s Christian Woman at Christianity Today Publications. She found great comfort in her faith and was involved in many church congregations over the years.