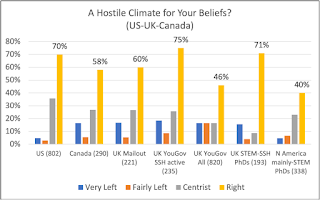 This study appears to confirm the anecdotal evidence that academics with "conservative" beliefs, including adherents of the traditional religious faiths, are less than fully welcome within the academic mainstream. But even feminists who believe that women's embodied experience as biological women necessarily excludes those born male and now claiming to be women are unwelcome as insufficiently progressive. This suggests that the academy is less open to a diversity of viewpoints even as offices of diversity and inclusion proliferate in university administrations.

The full report can be found here.

Although I myself do not identify as either conservative or progressive as those terms are currently used, I will admit that, because I am a Christian who believes the teachings of Scripture, some of which are unpopular in the current climate, I am likely to be placed in the conservative camp. I taught for thirty years in an explicitly faith-based university and was thus free to teach in accordance with my Christian convictions, which I might not have been able to do elsewhere. I am grateful for the opportunity to develop my own thinking in conversation with colleagues in an environment that remained supportive for most of my years there.

This suggests to me that the way forward is not simply to apply a blanket nondiscrimination regime across every institution everywhere, because it might threaten the integrity of faith-based universities, which necessarily base their hiring policies on adherence to the institutional vision. As the report indicates, some leftist academics self-censor their own views within the context of a faith-based institution. We regularly hear stories of academics at Christian universities who chafe at what they perceive as restrictions mandated by the institutional ethos. Yet their situations are mitigated by the fact that, at time of hiring, they knew what they were getting into and may even voluntarily have signed a faith and lifestyle statement.

However, at provincial or state universities and large private research universities, which supposedly embrace a variety of perspectives, hiring committees are being less than honest about the exclusive nature of the ethos of their department or institution. This is where concern for discrimination has legitimacy. If such universities were openly to codify their commitment to a particular vision of the academy, they would be justified in hiring only those who conform to it. A Marxist university would be within its rights to hire only Marxists as faculty. Yet if it were to do so, it might have to forego some important funding sources, including government education subsidies. This reality may encourage universities to make a pretence of supporting "the free exchange of ideas in an ethical, interdependent, and diverse community of faculty, staff, students, and alumni" while implicitly discriminating against prospective faculty who fail to conform to an expected cultural, social, or political viewpoint.

Another factor to be considered here is that, when ideological visions begin to gain influence, whether in the academy or in the political sphere, they tend to become hegemonic, that is, they are unwilling to share space with other competing visions. This is one of the key reasons why the architects of constitutional documents have seen fit to include key personal liberties, such as freedom of speech, intended to level the playing field of social and political life. Evelyn Beatrice Hall famously paraphrased Voltaire as follows: "I disapprove of what you say, but I will defend to the death your right to say it." John Stuart Mill similarly championed liberty of opinion in the 19th century, confident that truth would emerge out of the clash of ideas. Contemporary academics and students alike seem less confident in this, willing to prevent people with unpopular ideas from addressing them in public forums and perhaps even to terminate a colleague who expresses viewpoints different from "received" opinion. That younger people are more willing than their elders to push this regime of intolerance even further is not a good sign for the future. Codified guarantees of academic freedom can become dead letters if few any longer believe them.

In an ideologically polarized society, where people are decreasingly willing to discuss their differences and one side is only too willing to assert its hegemony, justice and political stability alike will become casualties. I will shortly come back to this issue, because there are ways in which sharply segmented societies can bridge the gaps between potentially antagonistic communities, at least at the leadership level, and thereby maintain a modicum of social peace. Stay tuned.