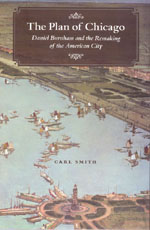 When I was a child, I fancied myself becoming an architect or a city planner and nurtured this ambition right up until my first year in high school. Growing up near Chicago, I was fascinated by this city's many cultural attractions, of which the Art Institute in particular stands out. Around 1850, when my 4th great-grandparents, Jeremiah and Nancy (Bridgeman) Davis moved from North Carolina to Cave-in-Rock, Illinois, along the Ohio River across from Kentucky, Americans thought that the centre of population growth in Illinois would be along the Rivers in the southern part of the state. At the time Chicago was a village of some 30,000 people along Lake Michigan in the far north.

Yet by 1893, when the World's Columbian Exposition opened, the little village had become a major urban centre of more than one million! This represents a near doubling of the city's population every year from mid-century until the last decade. Here is a marvellously informative video on one architect's vision for Chicago, as set out in Daniel Burnham's famous Plan of Chicago in 1909:

Modelled after Georges-Eugène Haussmann's plans for a renovated Paris under Emperor Napoleon III between 1853 and 1870, the Plan of Chicago envisioned a lakefront largely composed of public recreational green space, Parisian-style boulevards fanning out from a new city centre, a grand domed municipal building, and blocks of low-rise buildings similar to those of Paris. The Plan was never implemented in its entirety, but today's Chicago does indeed have a green lakefront built largely on landfill, numerous broad boulevards, a system of municipal parks and green spaces throughout, and a municipal pier which would become the well-known tourist attraction, Navy Pier. Some neighbourhoods of the city do have the blocks of low-rise buildings, as seen in the photo below: 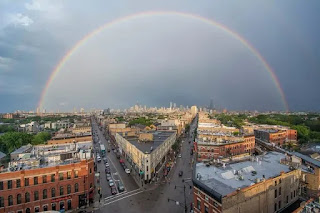 However, the background indicates that the city's core would come to be occupied by the high-rise buildings we have come to associate with large cities everywhere. In fact, Chicago would be one of the pioneers in the development of the skyscraper from the 1880s.

Of course, city planning carries the risk of running roughshod over ordinary people and the neighbourhoods they inhabit, destroying genuine communities and replacing them with planned, ostensibly better, communities that fail to take root. In Chicago the Cabrini-Green housing development became an egregious example of this phenomenon. Despite the progressive image that Chicago's leaders have long tried to project to America and the world, the city contains many scarcely-livable neighbourhoods riddled with crime, drug addiction, deteriorating buildings and infrastructure, and other dysfunctions. Last year there were 774 murders in Chicago, up from 506 in 2019.

In the 1960s the building of the University of Illinois's new Chicago campus south of the Congress/Eisenhower Expressway resulted in the destruction of the old Greektown neighbourhood, of which I have very dim memories from my childhood. In 1962 a poignant film was made in the run-up to the community's displacement, titled, Kali Nikhta, Sokrates (Good Night, Socrates):

For those interested in exploring further the pros and cons of city planning, read my 2013 Comment article, Urban Visions at Odds: Haussmann, Kuyper, and the Chicago Housing Authority. Abraham Kuyper in particular was not a fan of Haussmann's efforts to create a new Paris:

The Dutch Christian statesman Abraham Kuyper decried the artificial uniformity imposed autocratically on the city, much preferring bottom-up organic development of urban life. Indeed, "the modern spirit of Haussmann . . . violates even the consecrated soil of Montmartre to run a straight line through the circular pattern of its boulevards. . . . All the poetry of our cities vanishes, all the quaint gables disappear. The plasterer's trowel covers up in grey the white panes around the red bricks, and before long all diversity has been removed." Haussmann's reshaping of Paris might be viewed as a dark precursor to the totalitarian politics—or, better, antipolitics—of the twentieth century. If a municipal government arrogates to itself the right to uproot longstanding settled communities in the interest of building a better city, it is effectively going well beyond the normative task of government to do justice in the context of ordinary human diversity, ill-advisedly taking on the gigantic project of remaking social life as a whole, a conceit Kuyper traced back to the French Revolution.

Is there a place for the top-down city planning popular among urban élites in the 1960s? There is, but proponents need to retain a great deal of modesty in their expectations and refrain from assuming that they know what is best for real communities on the ground that have grown from the bottom-up.