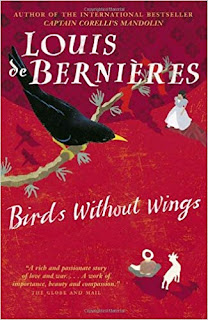 My paternal grandparents were born nominal subjects of the sultan in Constantinople, albeit under a British colonial administration. While Cyprus had come into British hands in 1878, it remained officially part of the Ottoman Empire until 1914. Like the surrounding territories, the island had a mixed population, with a 5 to 1 ratio of Greek Orthodox Christians to Turkish Sunni Muslims, along with much smaller Armenian, “Frankish” and Maronite minorities. Because Cyprus was unaffected by the population exchanges mandated by the 1923 Treaty of Lausanne, my father grew up with Turkish Cypriot playmates, one of whom, Abdullah, became very close to him and remained a lifelong friend until Abdullah's death in February of this year. Indeed the final separation of Greek and Turkish Cypriots would not come until a half century after Lausanne, as the events of 1974 divided the island seemingly irreparably.

I was reminded of our family's history as I recently read Louis de Bernières's Birds Without Wings (Vintage, 2004), a sprawling epic on a Tolstoyan scale set against the backdrop of the final years of the Ottoman era, the Great War, the Greco-Turkish War and the tragic aftermath. The story takes place largely in the small Anatolian village of Eskibahçe in what is now southwestern Turkey in the ancient province of Lycia. Based on the long abandoned village of Kayaköy, meaning “rock village,” Eskibahçe, meaning “old garden”—perhaps the Garden of Eden awaiting the inevitable fall—contains a colourful cast of characters known largely by their occupations and their respective religious faiths. Levon the Armenian is the local apothecary, providing medicinal cures for a variety of ailments. Iskander the Potter is a Muslim who so thoroughly submits to God's will that he does not plan in advance what he will produce, allowing the clay to decide what it will become under divine guidance. Father Kristoforos is the Orthodox priest and leader of the village's Christians who easily mixes with and ministers to the Muslims but denounces the occupying Italians as heretics. The book's title is an allusion to two boys, Mehmetçik and Karatavuk, a Christian and Muslim respectively, who are best friends eventually separated by war and deportation. Although their given names are Nikos and Abdul, they adopt the names of Robin and Blackbird after the clay bird whistles fashioned for them by Karatavuk's father Iskander.


The villagers follow traditions that have held sway for many centuries. Muslims and Christians are deeply aware of their differences, good-naturedly calling each other infidels, yet they are a single community whose members easily form enduring bonds across sectarian lines, albeit not without the occasional flareup of brutality. In fact, Philothei, a Christian girl whose evident beauty accords her a unique status in the village, is betrothed virtually from birth to Ibrahim the Goatherd, a Muslim. While tradition dictates that she will formally convert to her husband's faith, she will not leave behind her Christianity. In fact, the village's Muslims are nearly as likely as the Christians to light a candle before the icon of the Panayia Glykophilousa in one of the two churches, reasoning that it is “wise to back both camels in salvation's race” (138). When the Christians are deported near the novel's end, taking the icon with them, the Muslims feel as though they've been abandoned by a protecting presence.

The book has three features worth noting. First, the narrative is composed of several interwoven subplots that take the form of vignettes unfolding over the course of ninety-five mostly short chapters, plus six epilogue chapters . . . and a postscript! The effect might be compared to the pointillisme of such French impressionists as Georges Seurat, using a series of seemingly disconnected monochromatic brushstrokes to compose the whole. Second, there is no single point of view, with each of the principal characters telling a part of the story as they see it. This works for the most part, with the possible exception of chapter 85, which bizarrely takes the viewpoint of a foul-mouthed drowning Greek businessman sinking to the bottom of the harbour of the burning city of Smyrna in 1922. Third, the rise to power of Mustafa Kemal, later surnamed Atatürk and founder of the modern Turkish republic, is covered in 22 chapters scattered throughout the book. Kemal's life touches that of Karatavuk, who fights under his command at Gallipoli in 1915. Because Bernières's portrayal of the carnage in that battle is so memorably vivid, it is reasonable to assume that he must have had access to the letters of soldiers, if not in this particular battle, then in others under similar conditions. Given the grisly nature of the subject matter, the Gallipoli chapters are the most difficult to wade through.

The chapter I was most affected by was 88, in which the Christians of Eskibahçe are sent into exile to somewhere called Greece, a country most of them have never heard of and whose language they do not speak. To the villagers of whatever faith the outside world is foreign, and they lump west Europeans together in undifferentiated fashion under the label Franks. When the Great War begins, all they know is that they are fighting one group of Franks while allied with another Frankish people. When the sultan calif declares the war a jihad or holy war, they cannot understand how fellow Muslims from another foreign place called India could oppose them in battle. The sultan will not allow Christian men to fight in the Ottoman armies, conscripting them instead to work in labour battalions under harsh conditions akin to slavery. Mehmetçik is forced into one of these, despite his desire to fight alongside Karatavuk.

When the conflict finally stops in 1923 with the failure of Greece's attempt to conquer western Asia Minor, Greece and Turkey, with the encouragement of the western powers, agree to exchange populations to make the two countries more internally homogeneous. Given that ethnicity is so difficult a concept to define, the Treaty of Lausanne uses religion as the differentiating factor. Christians are to be sent to Greece and Muslims to Turkey, irrespective of mother tongue. The Christians of Eskibahçe will have to learn Greek, a language they know vaguely from their liturgies but in a much older form. Greek-speaking Muslims from Crete will come to live in Eskibahçe, where they will bring their own customs, including a delightful line dance called the pentozali.

While some of the book's reviewers hold that Bernières is making a point about the divisive character of religion, I picked up something different. After all, Christians and Muslims in the village had long ago learned to live side by side, practising their respective faiths in relative peace, loyal in their own ways to the sultan but little concerned with the world outside until it broke in and shattered their community. The Ottoman rulers had been fairly tolerant for their times, taking in the Spanish Jews expelled in 1492. Turks, Arabs, Greeks, Jews and Armenians lived and worked side by side until modernizing forces in the late nineteenth and early twentieth centuries sought to homogenize the populations along ostensibly European national principles. This is when the troubles began.

As I see it, Bernières is illustrating the destructive potential of ideologies undertaking to force real people with their traditional ways into artificial moulds dreamt up by intellectuals. We see this in the somewhat overdrawn character of Daskalos (Teacher) Leonidas, who instructs the village's Christian children and conspires with others on behalf of the Meghali Idhea, an irredentist vision of primarily mainland Greeks who aspire to an expanded greater Greece or even a revived Byzantium. Leonidas tries to inculcate this Hellenic identity into his charges, expressing displeasure at their inability to use a language that is not theirs. With his lofty dreams in tatters near the end, Leonidas pathetically tries to convince the puzzled Christians that they are Greek and that their land is indeed an integral part of Greece.

I say that Leonidas is overdrawn because, unlike Bernières's other characters, he appears to have no redeeming qualities whatever. He is a caricature of the early twentieth-century ethnic nationalist, heartily disliked by even the Christian villagers who nevertheless inexplicably allow him to teach their children. In chapter 45 Leonidas is thoroughly humiliated by the other villagers, with the narrator, presumably already dead from drowning in Smyrna harbour, recounting that he had told the schoolteacher how he had brought it on himself. Because my relatives became refugees in 1974 due largely to the misguided efforts of Greek nationalists to unite Cyprus to Greece, I have little sympathy for such as Leonidas. Yet I couldn't shake the sense that the author was painting a cartoon figure. Notwithstanding the lopsided portrait of this single character, Bernières's narrative remains absorbing, with the other personalities ringing true to someone with familial roots in the region.

Like Eskibahçe, my father's native village lies largely in ruins in Cyprus' occupied zone adjacent the Mediterranean Sea. Our family's long abandoned orchards lie near the shore, and the descendants of their sheep continue to graze. The so-called tripartite house where my grandmother was born is intact but empty, with a mosque next door whose minaret points to the heavens. The house where my father was born is without a roof and mostly dismantled. The churches are empty, and our ancestors' grave stones were long ago knocked over. Fifteen years ago my father was able to renew his friendship with Abdullah (whose name is obviously similar to Karatavuk's given name) and was even able to visit him several times after the green line was opened in 2003. I pray that a merciful God will allow them once more to drink kafe tourkiko (or elliniko, depending on one's preference) together at the table of a kafeneio in the redeemed world to come.

This is an expanded version of "Flightless Birds," published by First Things on 17 June 2019.
Posted by David Koyzis at 10:55