Ten years after I posted my Genevan Psalter website, I have now uploaded printable scores in PDF format for virtually all of the psalms, canticles and hymns I have written or arranged. In some cases these may not be precisely the same arrangements as the midi files. It will take me some time to go through these one by one to bring some consistency to them, which is a project for another day. For those wishing to sing them in formal or informal settings, I have posted at the bottom of the front page of this site my terms of use, along with the copyright information.
Posted by David Koyzis at 18:39 No comments:

When driving into Detroit from Windsor over the Ambassador Bridge we have often puzzled at the identity of the abandoned multi-storey building off to the right, which seems to embody the sorry state of the once thriving Motor City. I have recently learnt that it's the shell of the Michigan Central Station, an architectural landmark built in 1913 and closed in 1987. Efforts to refurbish the old station have thus far been unsuccessful, stymied by the lack of available funds.

Here is a tour of the building made the year it closed:

I am not at all keen on the casino idea mentioned in the first video, but perhaps the example of LIUNA Station here in Hamilton offers some promise for MCS. This was the old Canadian National station on James Street north, which operated between 1931 and 1993. In 2000 it was reopened as a banquet hall by the Labourers' International Union of North America. Trains may once again use the station as part of a long-term transportation plan for Ontario's Golden Horseshoe, and a platform is being built to accommodate them. Detroiters should take note.
Posted by David Koyzis at 09:55 1 comment: 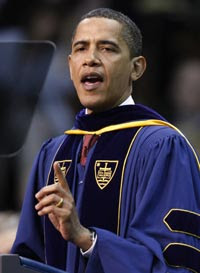 Whither Notre Dame? I think we can safely say that it will continue to be a force to contend with in the world of football. It is also likely to keep the undying loyalty of Domers past and present, who give generously to their alma mater. But it's an open question whether Notre Dame will survive over the long term as a genuinely Catholic university or, in the short term, whether Fr. Jenkins will keep his job after his inept handling of this fiasco.
Posted by David Koyzis at 09:47 No comments:

Here is something that could conceivably remake academia as we know it and much else as well: Fit to print: Will the Espresso book machine revolutionize the publishing industry?
Posted by David Koyzis at 22:19 No comments:

Kuyper and the psalms

The famous Dutch polymath stands corrected: Kuyper on the Genevan melodies
Posted by David Koyzis at 12:52 No comments:

Efforts at electoral reform in British Columbia have received a severe setback as residents of that province decisively defeated proportional representation in yesterday's referendum: B.C. voters turn thumbs down on STV. It may take a political crisis similar to the one in New Zealand to galvanize the electorate to do something about our current first-past-the-post system.
Posted by David Koyzis at 06:44 No comments:

From CLAC to CPJ

Here is the official announcement from the Center for Public Justice on the appointment of its new head: Gideon Strauss Appointed New CPJ President. In anticipation of assuming these responsibilities, Strauss has begun a new blog: http://cpjustice.org/gideonstrauss/. Although we will certainly miss his presence with us here in southern Ontario, we wish him the best as he takes up this fresh challenge south of the border. May God grant him wisdom and courage.
Posted by David Koyzis at 08:47 No comments:

Posted by David Koyzis at 19:56 No comments:

The man who has written for the Asia Times under the pseudonym "Spengler" for the past dozen years has dropped his persona: Confessions of a Coward. And what a colourful past he has had!
Posted by David Koyzis at 16:07 No comments: