Last month I was privileged to visit the Southeastern Baptist Theological Seminary in Wake Forest, North Carolina, where I lectured on "How Socialism Suppresses Society." A video of my lecture has been posted on YouTube with Portuguese subtitles for anyone interested. However,  as my delivered lecture was an abbreviated version of the text, I am posting the full text here:

Until last year's presidential election campaign, socialism had long been a nasty word in the American political lexicon. It had been associated with the worst forms of tyranny, especially those of the Soviet Union and the People's Republic of China. Thus many of us were surprised to see a certain United States Senator from Vermont gain a dedicated following among especially younger voters while proudly wearing the democratic socialist label. Their elders would have blanched at the prospect of a socialist president, while they themselves manifested no such fear of an ideological vision whose character and history is without doubt unfamiliar to them.

Nevertheless, virtually all western democracies can boast a sizeable socialist party of some sort. Britain has its Labour Party, while Australia has its Labor (minus the “u”) Party. France has its Parti Socialiste, and Germany its Sozialdemokratische Partei Deutschlands. Even my own country of Canada has its New Democratic Party, which, while never having governed at the federal level, has managed at times to form the government in half of the country's ten provinces, including Ontario. The United States had a Socialist Party in the first decades of the twentieth century, under the leadership of Eugene Debs (1855-1926), who famously campaigned for the 1920 election from a jail cell, and the venerable Norman Thomas (1884-1968), a Presbyterian minister who stood six times unsuccessfully for the presidency. But the high water mark for the party came in 1932, after which it lost its support base to Franklin Roosevelt's New Deal. As a consequence, the United States remains virtually the only country lacking a major political party adhering to the principles of socialism.

What exactly is socialism? Definitions vary widely, of course, and it is probably more accurate to speak of socialisms in the plural. Yet despite the differences, most manifestations of socialism have a number of characteristics in common. 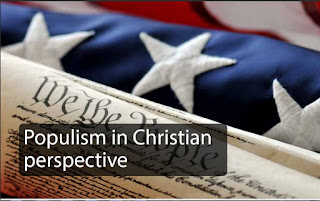 One cannot simply blame political leaders for the direction of an entire culture. George Bernard Shaw was perhaps more realistic in his observation that ‘Democracy is a device that ensures we shall be governed no better than we deserve.’ An overstatement perhaps. Yet it is true that political institutions and leaders alike are conditioned by a complex of cultural assumptions characterising the polity as a whole. A people accustomed to autocracy is very likely to be ruled by autocrats. A nation whose people are corrupt in their daily lives are highly unlikely to be governed by leaders careful to avoid conflict of interest in the conduct of public affairs.

Posted by David Koyzis at 11:32 No comments: