Abraham Kuyper and the Pluralist Claims of the Liberal Project, Part 4: The Kuyperian Alternative

In response to the evident defects of liberalism, we might well ask what the alternatives might be. We evidently cannot return to the religious establishments of old. Even the most dedicated communitarian is highly unlikely to make such an obviously retrograde proposal. Although at least one church body has long sought to amend the US Constitution to recognize the mediatorial kingship of Jesus Christ, no one would argue that, for example, the state’s coercive apparatus should enforce ecclesiastical judgements issued against recalcitrant members.

Everyone now presumably agrees that the execution of heretics handed over by the Inquisition to the civil authorities was not only a very bad idea but fundamentally unjust as well. Nevertheless, the major Reformed confessions of the sixteenth and seventeenth centuries charge the civil authorities with the responsibility to “protect the sacred ministry; and thus [to] remove and prevent all idolatry and false worship; that the kingdom of antichrist may be thus destroyed and the kingdom of Christ promoted.” By the beginning of the nineteenth century, this confessional charge to the political authorities was sounding less and less plausible in the increasingly pluralistic societies of Europe and North America.

Abraham Kuyper and the Pluralist Claims of the Liberal Project, Part 3: What Liberalism Implies for the Two Pluralisms

In Part 2 we examined the implications of Kuyperian and liberal pluralisms for ecclesiology, that is, our understanding of the nature and authority of the institutional church. We noted, in particular, that liberalism, following John Locke, is compelled to reduce it to a mere voluntary association of like-minded individuals.

There are two implications to this liberal move. First, it is incapable of accounting for structural differences among an assortment of communities. State and church are not essentially different from the garden club or the Boy Scouts. Whatever differences appear to the casual observer can be ascribed to the collective wills of the individuals who make them up. Proponents are persuaded that, even if different groups of citizens operate out of divergent comprehensive doctrines, they must be made to look beneath these commitments to what are believed to be the raw data of human experience that bind all persons together. These data are, of course, the constituent individuals themselves.

Every community can be easily understood as a collection of individuals who choose to be part of it for reasons peculiar to each member. There is nothing unusual about this approach, the liberal insists. Michael Ignatieff believes himself justified in asserting that liberal individualism is not peculiarly western or historically conditioned; it is human and universal: “It’s just a fact about us as a species: we frame purposes individually, in ways that other creatures do not.” Therefore if the claims of groups and individuals come into conflict, as they inevitably must, Ignatieff confidently concludes that “individual rights should prevail,” despite the contrary claims of nationalists, socialists and many conservatives of a communitarian bent.

Abraham Kuyper and the Pluralist Claims of the Liberal Project, Part 2: The Church as Voluntary Association

As we noted in Part 1, liberalism attempts to guarantee pluralism by empowering the individual, often at the expense of the very communities that go into shaping her. But in so doing, liberalism denies these communities any authority not reducible to the wills of the component individuals.

If, for example, we were to agree with John Locke’s definition of the church, we would find ourselves in territory foreign to the mainstream of the historic faith. According to Locke, “A church, then, I take to be a voluntary society of men, joining themselves together of their own accord in order to the public worshipping of God in such manner as they judge acceptable to Him, and effectual to the salvation of their souls” (emphasis mine). While there are undoubtedly many Christians, especially protestants in the free-church tradition, who would implicitly agree with Locke’s definition, the mainstream of the Christian tradition has viewed the church as the covenant community of those who belong to Jesus Christ, who is its Saviour and head.

Moreover, the gathered church, as distinct from the corpus Christi which is more encompassing, has been generally recognized to be an authoritative institution with the power to bind and loose on earth (Matthew 16:19, 18:18). As such it is more than the aggregate of its members but is a divinely-ordained vessel bearing the gospel to the world and especially to the church’s members.

Abraham Kuyper and the Pluralist Claims of the Liberal Project, Part 1: Liberalism and Two Kinds of Diversity 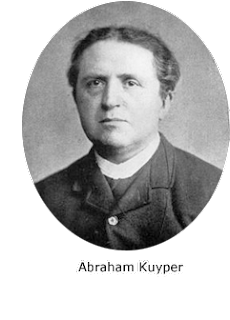 Although it can be misleading to seek the meaning of commonly-used words and expressions in their etymological origins, in the case of liberalism, the linguistic connection with liberty is all too obvious. The promise of liberty is an attractive one that holds out the possibility of living our lives as we see fit, free from constraints imposed from without. We simply prefer to have our own way and not to have to defer to the wills of others.

Yet even the most extensive account of liberty must recognize that it needs to be subject to appropriate limits if we are not to descend into a chaotic state of continual conflict, which English philosopher Thomas Hobbes memorably labelled a bellum omnium contra omnes, a war of all against all.

Here I propose to compare two approaches to liberty, viz., those of liberalism and of the principled pluralism associated with the heirs of the great Dutch statesman and polymath, Abraham Kuyper. Although each claims to advance liberty, I will argue that the Kuyperian alternative is superior to the liberal because it is based on a more accurate appraisal of human nature, society and the place of community within it.