Is Nationalism Worth Defending? 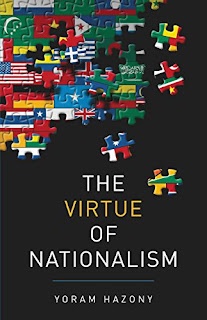 When I first came across Yoram Hazony’s The Virtue of Nationalism, I found the title off-putting. After all, I have devoted an entire chapter of my Political Visions and Illusions to nationalism, which I treat as an idolatrous love of nation: in an effort to bind people together in a tighter unity, nationalists often exalt the nation, however they define it, at the expense of more proximate loyalties rooted in the pluriformity of communities making up a complex differentiated society. Thus when I started reading Hazony’s treatment, I steeled myself for what I expected to be a grim experience.

Nevertheless, once I was into the book, I quickly discovered that it was not what I had expected. Far from defending an idolatrous love of nation, the author has advanced what amounts to an implicitly Aristotelian defence of the nation-state as the optimal form of political governance. A world of independent nation-states is the virtuous mean between the extremes of tribal anarchy on the one hand and supranational empire on the other. In defending the national state against its apparently vicious rivals, Hazony mounts a modest argument in favour of a non-utopian order which, while far from perfect, he believes best facilitates political freedom. While his thesis has applicability across a broad range of political life, the author employs it in defence of his own homeland of Israel as a state embodying the Jewish nation, acting unilaterally when necessary. He refrains, however, from affirming a universal right to national self-determination, conceding the legitimacy of prudential considerations in particular cases. In this respect, his argument has Burkean overtones.

Does Hazony’s defence of the national state work? Yes. And no!