The fate of two ghost cities

Over the decades, my extended family's experience has been shaped by the sorry fate of two ghost cities nearly 10,000 kilometres apart.

In July 1974 the military government in Athens engineered a coup d'état in Cyprus and installed a puppet dictator expected to annex the 14-year-old island republic to Greece. This reckless escapade came crashing down when Turkey sent a military flotilla to the north coast of Cyprus on the pretext of protecting the country's ethnic Turkish minority. Greece's military régime went down with it, along with relentless aspirations in some quarters to unite the two countries in a greater Greece. 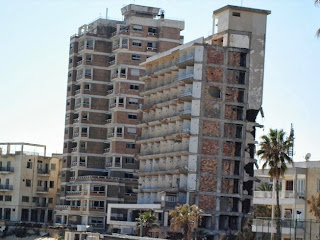 In August, while the United States' attention was focussed on the transition from a discredited president to his inexperienced successor, Ankara took advantage of its presence in Cyprus, expanding its foothold and occupying 37 percent of the island. One of the casualties of this venture was the prosperous Varosha district of Famagusta on the island's east coast. Varosha is located just south of the old walled city of Famagusta, built by the Venetians in the 16th century and the setting for much of Shakespeare's Othello. Varosha was largely inhabited by Greek Cypriots and became the centre of the island's tourist industry in the 1960s. Boasting the best beaches in Cyprus, high-rise hotels were built there to accommodate the influx of foreign visitors on holiday. My father had spent his youth there, and by 1974 most of my relatives on his side were still residents, including my elderly grandparents.

This all changed during that terrible summer. As Turkey moved to take the northern part of Cyprus, Varosha's residents fled hurriedly, leaving dishes on the table and laundry on the lines, assuming they would soon be returning after the crisis had passed. But this never happened, and my relatives and so many others became refugees in their own country. I was a young man at the time, and this traumatic event was one of the precipitating factors in pushing me towards the study of political science.

Twenty-one years later I finally got to Cyprus and was able to gaze from a distance on the eerie sight of an abandoned city, caught in a United Nations-monitored buffer zone, with homes, cafés and hotels crumbling into disrepair (see photograph above left).

Now to this side of the pond. 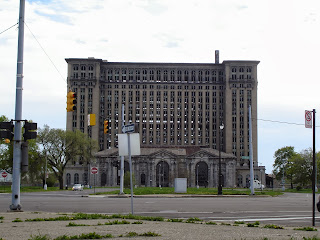 For just over a quarter century I have regularly driven the stretch of road between Hamilton and Chicago to visit family. This usually requires a drive through Detroit, once a thriving metropolis but now a dilapidated city with large tracts of land simply abandoned by its one-time residents. Crossing the Ambassador Bridge from Windsor into the Motor City brings into view a tall, eerily empty building that used to be a transportation hub for the region. The historic Michigan Central Station (above right) saw hundreds of trains arriving and departing daily during the railways’ heyday in the first half of the 20th century. Last used in 1988, this formerly magnificent building has fallen into an advanced state of decay, along with so many other landmarks of a once great city.

I personally greeted the news that Detroit had filed for chapter 9 bankruptcy with considerable sadness. My mother grew up less than an hour away, and I still have relatives on her side living in the Detroit metropolitan area. Once the centre of North America’s now vastly diminished automobile industry, much of Detroit is now a ghost city, its former residents having long ago fled to the suburbs or to America’s Sun Belt. It might be a stretch to label them refugees, yet for those who were born and grew up there and can no longer safely return, the loss of their “homeland” must still be difficult to accept.

Of course, conquering armies did not literally expel Detroit’s inhabitants from their homes, as occurred in Varosha. Yet the fate of both cities is due in large measure to political authorities pursuing ill-considered and short-sighted policies at the expense of ordinary people.

Like individual persons, cities are born and die. But unlike persons, cities can be revived and become livable again. The last book of the Bible tells us that the redeemed creation will be centred in a city, the New Jerusalem (Rev. 21:2). Whether Varosha and Detroit become signposts to this city, attaining their former prosperity and becoming home to new generations, depends on God’s will and timing. In the meantime, though some of us will continue to mourn these cities’ current sad circumstances, we do so as those expecting the ultimate fulfilment of urban life in Jesus Christ and his redeeming grace.

David T. Koyzis has taught politics at Redeemer University College, Ancaster, Ontario, for just over a quarter of a century. This appeared in the 14 October issue of Christian Courier as the latest instalment of his "Principalities & Powers" column, which has been running monthly since 1990.
Posted by David Koyzis at 11:39 No comments: