Some two decades ago one of my colleagues gave me a copy of his own nonmetrical English translation of the Dutch Christmas hymn, O Kerstnacht, Schoner dan de Dagen. The text was written by the Dutch poet and playwright Joost van den Vondel in 1637. The melody is attributed to Cornelis Padbrué and is performed below by Harald Koll on a most unusual instrument known as a kontra guitarre. I recently found that I had versified this text for two of the stanzas some time ago, but not for the third. My discovery today of this performance perhaps provides an occasion to complete the job so that it can finally be sung in English.

Posted by David Koyzis at 15:19 No comments:

The child born in Bethlehem

Canada's National Post published an unexpected and rather extraordinary editorial yesterday: The child born in Bethlehem. Here's an excerpt:

In Christ all things hold together. All things, Christians believe, not just their own spiritual things. In Jesus Christ, to look at man is to look at God. In Jesus Christ, the God who lovingly and freely created the mighty galaxies and the lilies of the field now comes as man to redeem and to save that very same creation. The Christian good news is that in coming as man, all that man touches is now touched by God.

To use the Greek again, at Christmas what is anthropocentric now becomes theophanous -- to see man is to see God. The human and the divine are now united. All that man needs is now in contact with the divine. Man never loses his freedom to do evil, but he gains the capacity to build up what needs to be restored-- that all things might hold together again. For the Christian concerned about the environment, Bethlehem remains more important than Copenhagen.

Indeed, for the Christian, Bethlehem remains always more important; more important than Rome and Athens and Kyoto and Ottawa and New York and London, and other capitals ancient and modern. Those latter places provide the stories we have the privilege to report. On this day when many of our readers turn their attention to those Bethlehem nativity scenes, we acknowledge that there are stories greater still.

It's difficult to imagine The New York Times publishing something similar.
Posted by David Koyzis at 14:10 5 comments:

Unto us a Son is born 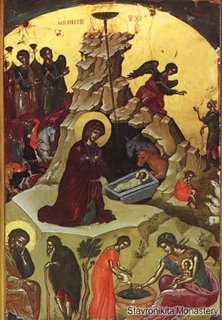 Posted by David Koyzis at 04:30 No comments:

All My Heart This Night Rejoices

Posted by David Koyzis at 21:02 No comments:

My friends and protégés at Cardus have been mentioned in an article by Jonathan Fitzgerald in today's Wall Street Journal: Winning Not Just Hearts but Minds: "And Comment, a publication of the Canadian Christian think tank Cardus, recently considered Christian perspectives on psychology." This particular issue was put together by my beloved friend and colleague, Russell Kosits, whose office is two doors down from mine at Redeemer. Also mentioned: ". . . and First Things—a traditionally ecumenical publication that recently launched a new section dedicated to evangelicalism." I myself have been privileged to write for the latter since its inauguration a few weeks ago.
Posted by David Koyzis at 13:40 No comments:

Wake, Awake, for Night Is Flying

I would love for our churches to sing Advent hymns all year round. Why? Because they convey the aching sense of longing that all of us Christians have as we continue to live between the times. As Dietrich Bonhoeffer put it,

Advent is a time of waiting. Our whole life, however, is Advent — that is, a time of waiting for the ultimate, for the time when there will be a new heaven and a new earth, when all people are brothers and sisters and one rejoices in the words of the angels: “On earth peace to those on whom God’s favor rests.” Learn to wait, because he has promised to come. “I stand at the door?” We however call to him: “Yes, come soon, Lord Jesus!” Amen.

Another of my favourite hymns nicely communicates this sense of anticipation of Jesus’ second Advent: Philipp Nicolai’s immortal 1599 text: Wachet Auf, Ruft Uns die Stimme, translated into English in the mid-19th century by Catherine Winkworth as Wake, Awake, for Night Is Flying. Inspired by Jesus’ parable of the wise and foolish virgins in Matthew 25: 1-13, it describes the coming nuptial feast in which the Bridegroom arrives to receive his bride, summoning the wise virgins who have been ready and waiting for this moment:

“Wake, awake, for night is flying,”
The watchmen on the heights are crying;
“Awake, Jerusalem, arise!”
Midnight hears the welcome voices
And at the thrilling cry rejoices:
“Oh, where are ye, ye virgins wise?
The Bridegroom comes, awake!
Your lamps with gladness take!
Hallelujah!
With bridal care
Yourselves prepare
To meet the Bridegroom, who is near.”

I had some difficulty locating a video performance of Wachet Auf that was not from J. S. Bach’s eponymous cantata, numbered BWV 140. I finally found this organ performance at the Friedenskirche in the north German city of Fedderwardergroden. This arrangement is closer to the original rhythm of Nicolai’s tune and is suitable for congregational singing.

Posted by David Koyzis at 21:18 No comments:

Some of my favourite hymns are Advent hymns. No, not the Christmas songs that fill the malls and airwaves around this time of year, but the Advent hymns that fill us with a sense of expectation at both comings of the Messiah. One of the very best has to be Saviour of the Nations, Come. The Latin text, Veni, Redemptor gentium, is attributed to St. Ambrose of Milan, famed mentor to the even more famous St. Augustine of Hippo. It was translated into German as Nun Komm, Der Heiden Heiland by Martin Luther in 1523. The tune was adapted from a 12th-century gregorian chant by Johann Walther the following year.

As great as J.S. Bach, Buxtehude and others are, I much prefer the old German chorales before the baroque composers got their hands on them and so heavily ornamented them. Accordingly, here below the hymn is sung in Latin by the Schola Cantorum Riga in Latvia. Simple is better.

Here is a version of the same tune beautifully performed by lute and descant viol. (I make no apologies for the busy visuals at the edges!)

Finally here is an intriguing jazz rendition of the hymn as arranged by Christian Steyer for piano and choir, performed a year ago in Berlin:

Posted by David Koyzis at 14:37 No comments:

Posted by David Koyzis at 03:04 No comments:

This term I have been teaching Ancient & Mediaeval Political Theory, a course that is crosslisted between the philosophy and political science departments at Redeemer. Yesterday we heard two fine student presentations on Thomas Aquinas’ writings on the virtues (Summa Theologica Ia-IIae, qq. 55-64). Here we encountered his explanation of the four cardinal natural virtues, viz., prudence, justice, fortitude and temperance, which he borrowed from Augustine, the stoics and, ultimately, Plato, even as his account of these virtues is basically Aristotelian.

Then we were introduced to the three theological virtues of faith, hope and charity or love. The difference between the natural and theological virtues is that, while the former are acquired through habitually choosing the right mean between vicious extremes, the latter are directly infused in us by God without our effort and are not defined by a mean. It is impossible, e.g., to love God to excess. Thomas, of course, took these virtues from the famous 13th chapter of Paul’s first letter to the Corinthians.

Evangelical and Reformed Christians often express discomfort with Thomas’ distinction between natural and supernatural virtues, as they do with the parallel synergism of Roman soteriology which suggests that we can contribute so much to our own salvation but must then wait for God to complete it through his grace. This distinction appears to downplay the role of God’s grace in enabling even our own response to his call.

But there is something else that appears to indicate that Thomas’ identification of faith, hope and love as virtues is not entirely without difficulties. It further suggests that perhaps his debt to Augustine is not as great as it might have been. Augustine famously defined virtue as rightly ordered love. The two cities are distinguished from each other precisely by their different loves. The city of God loves God above all that he has created, while the city of this world loves the creature rather than the creator. Both love, but in the latter case love is ill-directed and out of order.

If so, then perhaps faith, hope and love are not virtues at all, but created human functions that are themselves subject to virtuous or vicious use. Just as we can love inordinately, so also can we put our faith in the wrong things. Everyone, even the professed atheist, puts her faith in something, whether it be reason, material or biological forces, economic growth, a messianic proletariat or the continual satisfaction of subjective desires. Similarly we have a tendency to misplace our hope in things that will ultimately disappoint, as we are so often encouraged to do in election campaigns and even ordinary advertising.

As I am painfully aware that there are scholars better versed in Thomas’ works than I am, I would be interested to know from them how Thomas might address this apparent difficulty in his account of the virtues. I do not, of course, exclude the possibility that it is I who am missing something here.

Posted by David Koyzis at 13:51 No comments: