During this Christmas season, I think it is most appropriate to post this wonderful passage from one of the writings of the great Princeton theologian, Benjamin Breckinridge Warfield (1851-1921). In Reformed Christian apologetics, Warfield and Abraham Kuyper are often seen as opposed to each other, as the former focuses on evidences for the faith while the latter emphasizes the presuppositions that either support or oppose the faith. However, the following passage, taken from Warfield's collection of sermons, Saviour of the World, indicates that we ought not to overstate their differences and that they were at one in their understanding of the nature of redemption in Jesus Christ as encompassing the whole creation. I have broken up the passage into smaller paragraphs for easier reading.

It belongs to the glory of Christ that His salvation enters into every region of human need and proclaims in all alike complete deliverance. Even the lower creation, by virtue of the relation in which it stands to man, partakes in his redemption. If the very ground was cursed for man's sake that the place of his abode might sympathetically partake in his punishment, no less shall it share in his restoration. Man's sighs are not the only expression of the evil that curses human life in its sinful development. The whole creation groans and travails together with him. But it shares also in the hope of the coming deliverance.

Such is the picture the Scriptures draw for us of the salvation of our God. And let us not fail to note that it is a picture of a saved world. As no sphere of human life is left untouched by it; as on its touch, every sphere of human life is transformed; so the completeness and the profundity of its renovation of man is matched by the wideness of its extension over man. It is the renewed heavens and the renewed earth that we are bidden to contemplate; and dwelling in them in endless bliss renewed humanity. Renewed humanity; not a meagre company withdrawn from the sin-festering race, but the race itself, cleansed and purified and gathered home to the Father's arms; not without loss suffered by the way, it is true, for there are some who shall not enter into this holy city; but with all losses made good, all breaks in the ranks filled up, and all lacks and wants supplied by Him who has redeemed it to Himself and led it to its new estate of perfection in itself and eternal communion with Him. Such is the salvation that has been wrought out for us by Christ (Warfield, The Savior of the World, pp. 49-50).


"And He shall reign forever and ever!"
Posted by David Koyzis at 13:29 No comments: 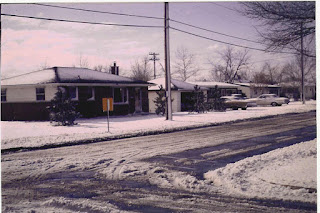 I grew up in a modest neighbourhood in a suburb of Chicago in the 1960s. My parents built their first home there in 1958 for the princely sum of $19,000! It was a three-bedroom ranch that shared the same basic design with a row of ranches on the south side of the street. On the north side were a line of one-and-a-half storey bungalows with dormers on the roofs. As children we played regularly with the other children who lived around us, and our parents generally knew each other and would occasionally be at each other’s homes. The elementary school was right on the opposite corner from us, and we mixed freely together in the school and playground.

Although this was not an old neighbourhood, having been laid out shortly after the end of the war, it was good neighbourhood where people chatted with each other and seemed to have a sense of community.

There were some colourful characters living near us. The elderly couple we all feared because they didn’t like children playing in their yard. A woman whom we called “Mrs Fritzy” after the eponymous dachshund she walked past our house every day. The man who had spent ten years in the Soviet GULAG and travelled around lecturing on the threat of communism. The sports writer for the Chicago Sun-Times who briefly lived across the street and almost immediately moved away after his divorce. The professor with three PhDs who would regularly come to our house to borrow, of all things, our dictionary.

We lived there for ten years, but they were formative years for my siblings and me. We were Presbyterians attending a public school named for a New England transcendentalist. I knew which children in my classes were protestants and which Catholic, and at least two of my teachers were evangelicals, one of whom had a Frisian surname and was a member of our church. Although a girl in my sister’s class was an atheist—an exotic specimen in my hometown—our school nevertheless put on a full Christmas programme every year, complete with carols about the birth of Christ. And then there was the Fun-o-Rama, a spring fund-raising bazaar in which everyone participated in some fashion.

Our town was in a flood plane, and an especially malodorous creek flowed behind our house. On a dare from a friend, I swung over the creek on a rope hanging from a tree branch, only to have the rope break and find myself plunging into the filthy waters below, much to the irritation of my long-suffering parents.

Having had such a wonderful childhood, I find it easy to become nostalgic about our old neighbourhood. I still dream occasionally of that ranch house in which we somehow managed to squeeze eight people—albeit not exactly comfortably. It was not a perfect neighbourhood, but we nevertheless made the time to cultivate the bonds of friendship with the people living around us.

Is this still true today? Do neighbourhoods still have a sense of community? I cannot speak for everyone, of course, but judging from my own experience I fear it may be a thing of the past. Houses are consumer items that we purchase, knowing full well that we are likely to sell them again at some point. We put a lot of our financial resources into our homes, trying to maintain and even increase their value so that they can be resold easily when the time comes. But this makes whatever community exists in a neighbourhood very transient indeed. We are committed to our homes, but less to the communities of which we are supposed to be part.

What if a group of friends were to buy up adjacent homes with the intention, not just of securing their own economic well-being, but of building community and improving the shared life of the surrounding neighbourhood? It might be even better than the neighbourhood in which I grew up so many years ago.

This was first published in the 14 November issue of Christian Courier. Please subscribe today.

Posted by David Koyzis at 10:44 No comments:

One of the real joys I've experienced this past term is teaching two sections of a humanities course, Western Culture and Tradition I, which forms part of the new core curriculum at Redeemer University College. I love teaching political science, of course, but I've found that preparing this new course has allowed me to bring more of myself and my various interests into the classroom. Altogether I've taught around seventy-five students, or about half of the incoming class.

Among other things, we discussed the history of the earliest Christians who were often subject to persecution under the Roman imperial authorities. We noted that the ancient symbol of the faith, by which Christians were able to identify each other, was the fish. The Greek word for fish at that time was ΙΧΘΥΣ, an acronym for:


Throughout the term, the students handed in journal reflections on either a text we studied or a cultural artefact such as a building or a work of art. I allowed for some creativity in the assignment, and one student came up with a striking poem on the fish symbol in the form of perfect Petrarchan sonnet:

And hide in shadows cast by morning glows.
I glance from side to side for any foes
Who might appear from dubious abodes.

A sudden light in front of me forebodes
A passerby who might a danger pose.
My hand, though hesitating to disclose,
A single arch upon the sand encodes.

A mirror arch he scratches in the sand.
A fish we've drawn, two parts becoming one.
His shining face the rising sun now greets.

I've found a brother in a hostile land.
We fully trust in Father, Spirit, Son,
And stride abreast through swarming city streets.


I commend Mr Vander Hout who, at such a young age, already manifests promising poetic skills. Bravo!
Posted by David Koyzis at 11:03 No comments: