Providence magazine carries a transcript of Mark Tooley's interview with me in July: David Koyzis' Political Visions & Illusions. An excerpt:

KOYZIS: Well I think the positives are that people have a lot of enthusiasm. I think this is certainly more now than was the case when I was growing up. I think when I was growing up in the 60s and 70s, a lot of evangelicals had more or less withdrawn from social and political life, and they had for about the previous 50 years. I don’t think that could be said today. I think a lot of people are more involved in political affairs than was the case in the past.

But I think the negatives are that this involvement sometimes comes with an unhealthy activism. We want to do something, and we haven’t thought adequately about the foundations that support whatever activity we wish to be involved in. And that can be dangerous, because we can get on the bandwagons, we can follow movements that sound right, but may actually be problematic when you start to dig a little bit deeper into them.

Posted by David Koyzis at 09:33 No comments: 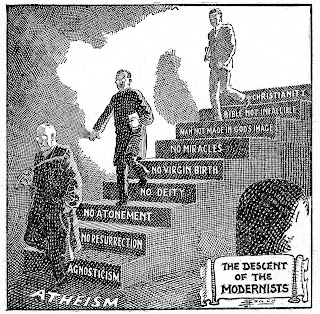 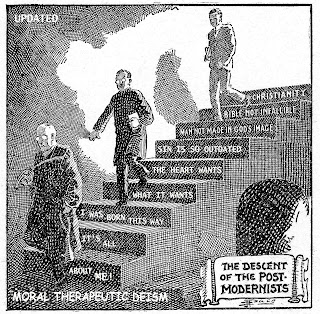 Posted by David Koyzis at 14:47 No comments: Posted by David Koyzis at 15:23 No comments:

Tribute to my father

My monthly column in the Canadian periodical Christian Courier is devoted to my late father, a "man who survived more than his share of near-death experiences and turned tragedy into poetry."

Throughout his 92 years he experienced vivid signs of God’s work. Ten years ago, he survived a lightning strike on the car he was driving, and five years ago he and my mother miraculously walked away unscathed from a serious automobile accident. So many times did such events happen to him that we sometimes thought him immortal. He was not, of course. But when God saw fit to draw his years to a close last month, we were thankful for a life well lived, confident that we will meet him again at the resurrection of the righteous.

Pastor Vitor Grando, of the Igreja Presbiteriana do Bairro Imperial, Rio de Janeiro, has completed his series of lectures on my book, Political Visions and Illusions. These lectures are posted on the church's YouTube channel. The playlist begins here.

Intellectuals and the totalitarian temptation

Last week I posted one of Hannah Arendt's examinations from 1955, and one question in particular intrigued me: "Explain why intellectuals can be attracted by a totalitarian ideology."

This is something that has perplexed many observers over the past century. From Martin Heidegger's positive estimation of national socialism to Jean-Paul Sartre's early flirtation with communism, many of the most influential philosophers and writers have flirted with an ideology that promises redemption and uses any means to achieve it, however costly in human terms. Sartre himself became disillusioned by Moscow's crushing of Hungary in 1956 but continued to advocate some form of socialist revolution in his later years.

Jean Francesco reviews my first book: "This book, in my opinion, is the best book for Christians . . . on politics." Muito obrigado, irmão!

Posted by David Koyzis at 09:27 No comments:

This week I was interviewed by Ian Simkins and Brian From on "the Common Good" over Chicago radio station WYLL, AM 1160. It has now been posted here: Guest: David Koyzis, Author - Political Visions & Illusions: A Survey & Christian Critique of Contemporary Ideologies - September 2, 2020. 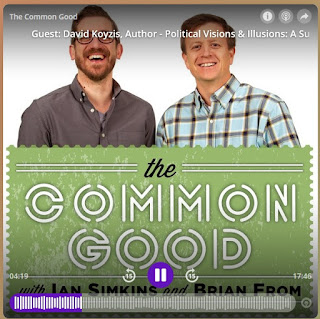 Several weeks ago I was privileged to give an address to an online gathering of Direito Reformacional in Brazil. Arthur Loureiro was my host, and Vinícius Pimentel was translator. The lecture runs from the beginning of this video to around 40 minutes.

Posted by David Koyzis at 10:34 No comments:

Someone recently posted this on Facebook, purporting it to be a final examination from one of Hannah Arendt's (1906-1975) courses at the University of California at Berkeley. I cannot imagine she would have been an easy marker. 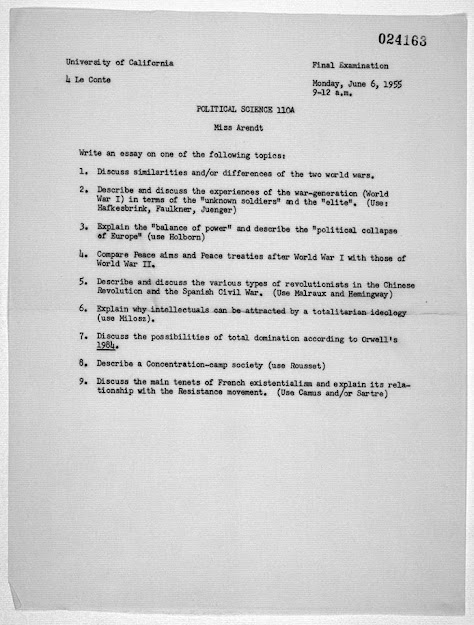 Posted by David Koyzis at 16:40 No comments: