My esteemed protégé and part-time colleague, Rob Joustra, has teamed up with his Cardus colleague Alissa Wilkinson to author Not their parents' conservatism, which appears in today's Globe and Mail, Canada's national newspaper. Definitely must-read material.
Posted by David Koyzis at 10:29 No comments: 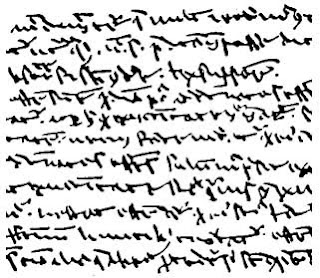 Who knew? When Fordham University posted this sample of Thomas Aquinas' handwriting on its page for today's Natural Law Colloquium, it provided needed evidence for something that had been only conjecture up to now: the late mediaeval theologian's writings were obviously transcribed for the printed page by pharmacists.
Posted by David Koyzis at 13:42 No comments:

A song beloved by Byzantine-Rite Calvinists everywhere, though it's been decades since I last heard it. The University Six perform.

Posted by David Koyzis at 09:45 No comments:

Several years ago I had a student in my classes who was born in Baghdad and claimed to have grown up speaking both Aramaic and Arabic. Her family are Christian and consider themselves Assyrian, one of the most ancient communities in that part of the world. They had come to Canada some years earlier but had many relatives still in their ancestral Mesopotamian homeland.

Please remember to pray for our beleaguered brothers and sisters in Christ living in that troubled land. Lord have mercy!
Posted by David Koyzis at 09:41 No comments:

Posted by David Koyzis at 19:29 No comments:

Here is an incomplete list of some of the significant anniversaries taking place over the next several years.


Mark these in your calendar, and be sure to order your greeting cards early to avoid the rush.
Posted by David Koyzis at 16:44 No comments:

Although I am not an academic theologian, I have recently been grappling with a seemingly insuperable problem which for centuries has stumped the best minds in Christendom: How could a good God be so slow to answer a prayer for patience? Proposed solutions may be left in the comments below.
Posted by David Koyzis at 09:44 2 comments:

As of today the 2011 update of the New International Version Bible is available online here. Will it be accepted by longtime NIV aficionados, or will it suffer the fate of the TNIV? Time with tell.
Posted by David Koyzis at 11:06 No comments: