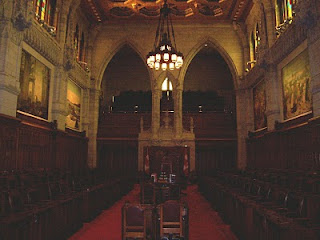 Of course, even short of statutory reform, the Prime Minister could simply allow the provinces to poll their own voters and then appoint the winners to the relevant seats. Since such appointments are entirely up to him, I should think he would be able to set the machinery in motion without having to consult the opposition parties. It might be worth a try.
Posted by David Koyzis at 11:27 1 comment:

The remains of a previously unknown human species have been discovered in Siberia. Provisionally called Homonym, it is distinguished from Homo sapiens by its relative inability to spell properly.
Posted by David Koyzis at 19:26 No comments:

The Senate: better than we think?

It often seems that Canadians generally dislike the Senate but cannot agree on what should be done with it. It is an appointive body, intended by the Fathers of Confederation to be a "chamber of sober second thought." Westerners would like to see an elected upper chamber, while Québécois and New Democrats generally prefer to see it abolished, much as the provinces abolished their own upper chambers decades ago. Alan Broadbent, Chairman and CEO of the Avana Capital Corporation, disagrees: The Better Chamber: A Defence of the Senate. Here's an excerpt:

The Senate record of useful investigations is impressive. Senator David Croll chaired two critical investigations, on Aging in 1966 and on Poverty in Canada in 1971. The Poverty report became a signal document internationally. In 1970, Senator Keith Davey chaired an investigation on concentration in the media, which has been revisited by the Senate several times since. The Standing Committee on Banking, Trade, and Commerce has studied Canada’s financial institutions regularly since the 1980s, contributing much to the stability of our banking system, which has stood out in the last two years. . . . Almost all of these reports have been of high quality, and their recommendations have often created key building blocks for Canada. In this regard, the Senate has completely outperformed the House of Commons for decades.

Broadbent may not persuade the sceptics, but I personally hope it takes some of the steam out of the efforts of the abolitionists.
Posted by David Koyzis at 21:42 1 comment:

In 1927 the Judicial Committee of the Privy Council in London settled in Newfoundland's favour the longstanding dispute between that dominion and Québec over this piece of the mainland. Thereafter the Québec government appointed a special minister-without-portfolio to attempt to undo this highly unpopular decision. This official became known to history as. . . (drum roll please and then click on comments)
Posted by David Koyzis at 19:13 1 comment:

At First Things: Evangel web editor Joe Carter challenged us to come up with a list of top ten books that have had an influence on us. Here is my list:

1. Abraham Kuyper, Lectures on Calvinism. This is the place to start for anyone interested in cultivating a christian worldview. Kuyper delivered these lectures in 1898 as part of the ongoing Stone Lectures at Princeton Seminary, then the bastion of Reformed orthodoxy. Kuyper (1837-1920) was the towering figure in the Netherlands of his generation, founding the Free University of Amsterdam (1880) and the Anti-Revolutionary Party (1879), and serving as Prime Minister between 1901 and 1905. This book is not without defects (e.g., he misunderstands the origin of the Genevan Psalter melodies), but it is groundbreaking in alerting Christians in North America to the all-encompassing character of Christ’s claim on our lives.

2. Al Wolters, Creation Regained. Long before the recent spate of worldview books for Christians, there was this book, which has become a minor classic. I was privileged to sit under the author, now a personal friend and colleague, when he taught the material in its pages at Toronto’s Institute for Christian Studies in the late 1970s. You had to be there.

3. Bob Goudzwaard, Idols of Our Time. Without this book and its perceptive linking of ideology with that ancient phenomenon of idolatry, I would not have written my own Political Visions and Illusions, which applies Goudzwaard’s interpretation to the classic modern political ideologies. Recently Goudzwaard, a retired Free University economist and former Dutch member of parliament, was on the campus of Redeemer University College, where I teach, and he was kind enough to sign my copy of this book.

4. James W. Skillen, The Scattered Voice: Christians At Odds In The Public Square. For some odd reason Zondervan allowed this gem of a book to go out of print. It was subsequently picked up by an obscure outfit, the Canadian Institute for Law, Theology & Public Policy, Inc. Here the author surveys the variety of alternative approaches to political life taken by American Christians. Some of the material is by now dated, but it is essential reading for anyone trying to understand the influences that fragment the Christian witness in the public square.

5. Herman Dooyeweerd, In the Twilight of Western Thought. Dooyeweerd (1894-1977) was a philosopher in the tradition of Kuyper who taught legal philosophy at the Free University. He founded a school of philosophical thought known in Dutch as De Wijsbegeerte der Wetsidee, or the Philosophy of the Cosmonomic Idea, as it has been inelegantly translated into English. Here he tackles the typically modern notion of the autonomy of human thought and the religious neutrality of reason. Dooyeweerd’s prose is not readily accessible to most readers, but his central insights into the orderly character of God’s creation richly repay any effort at comprehending his thought. Read more about his political theory here.

6. H. Richard Niebuhr, Christ and Culture. What more could possibly be said about this 1951 book? It’s the one book, after the Bible, which I’ve read the most number of times. I can more easily see its flaws than when I first read it 35 years ago, yet Niebuhr’s five typologies – Christ against culture, Christ of culture, Christ above culture, Christ and culture in paradox, and Christ transforming culture – have served to shape a conversation that has been going on for nearly six decades.

7. Yves René Simon, A General Theory of Authority. This is one of two essential books on the subject of authority. Simon (1903-1961) was a French neothomist philosopher who taught at the University of Notre Dame for ten years before taking a position at the University of Chicago. In this book the author attempts to rescue authority from its “bad name” by distinguishing amongst several functions of authority, the most essential of which are necessary, not because of human defect, but because of the very nature of life in community.

8. Richard De George, The Nature and Limits of Authority. This is the second must-read book on authority, in which the author carefully sets out a persuasive taxonomy of authority, distinguishing between, e.g., executive and nonexecutive, epistemic and exemplary, imperative and performatory manifestations of authority. Both De George and Simon have had an impact on the current book I am writing on authority and the imago Dei. The last sentence alone of this book is worth its price: “The enemy, however, is not authority but the abuse of authority” (p. 291). Exactly right.

9. David L. Schindler, Heart of the World, Center of the Church: Communio Ecclesiology, Liberalism, and Liberation. Schindler has to be my favourite Catholic philosopher, and this one book is more than enough to support my assessment. Schindler’s critique of liberalism is a radical one in that it gets to the root of this ideology rather than trying to defend it against its supposed latter-day distortions. After reading it, I found myself wondering whether the author had read Kuyper or Dooyeweerd, who would understand exactly what Schindler is doing here.

10. Herbert Lindemann, The Daily Office. I wrote last month of this book, which, more than anything else, reshaped my practice of daily prayer.

11. Ivan Sergeyevich Turgenev, Fathers and Sons. Yes, I know there are supposed to be only ten, but I couldn’t resist sneaking in one more. This 1861 book is one of those great Russian novels that have taken their place within the canon of world literature. But, unlike Tolstoy’s War and Peace, which is on everyone’s shelf but which few have actually read, Turgenev’s book is comparatively short and easily digested. The author’s portrait of Bazarov, the young “nihilist” (a word which seems to have originated here), is little short of prophetic in that it anticipates the generation of revolutionaries who would remake Russia and the world half a century later.

It turns out Karl Marx was wrong: religion is not the opiate of the people; it’s the Prozac of the people. So says the man who originated the concept of male bonding in this fascinating article in Canada’s foremost English-language newsweekly: Macleans interview: Lionel Tiger. Here’s a brief sample:

Q: That’s why you call churches “serotonin factories.” You hint about possibly developing the brain equivalent of bodily exercise. Serotonin pills as a religion replacement?
A: I’m not sure we’ll ever learn to manage brain secretions in any manner, and it may be that we don’t want to, but at least we now know that the feeling of oceanic identification with others in an assembly—a church assembly or whenever—is not magical, it’s neurophysiological. We can identify the juices. I think that’s fantastic, actually. And Mike [McGuire]’s work on serotonin did generate Prozac and a whole array of medications.

Q: Despite increasing secularization, especially in the West, most people have not become flat-out rationalists. Do you think that for many environmentalism is a religion?
A: That’s absolutely right, and that’s interesting because it is finally the fruit of pantheism, a very, very old religious idea. For many people, not using more than four sheets of toilet paper is an act of moral purification.

In addition to illuminating the roots of environmentalism, Tiger’s analysis further clears up an ancient and vexing mystery: why did so many saints willingly suffer a martyr’s death for the cause of Christ? It seems they just wanted to feel good.

Making too much of a good thing

One of the characteristics of an ideology is that it takes a genuine good and makes too much of it, that is, it effectively makes it into an idol. Thus it becomes difficult for those liberals emphasizing the validity of free markets to resist the temptation to claim a near universal efficacy for them. Case in point: Murray Rothbard, in For A New Liberty: The Libertarian Manifesto, where we find this revealing remark:

One of my pet peeves is the use of the left-right spectrum to categorize the diversity of political visions. There are three reasons for my dislike. First, the terms left and right have no enduring meaning, which has shifted with time. Second, they are frequently used as terms of derision against an opponent, to whom, once we have assigned the label, we have decided we no longer have to listen. Third, they obscure the genuine religious character of the ideologies so categorized.