Giving up on the Constitution?

For many years now I've been teaching my students that a constitution is more than a scrap of paper but is to be found in the deeper principles and commitments of a particular political community. Here in Canada in recent decades we have embraced the notion that our constitution is identical to our codified Constitution Acts, while traditionally we have recognized other sources of our constitution, including organic statues (i.e., ordinary laws whose subject matter is constitutional), court rulings (including those of London's Judicial Committee of the Privy Council prior to 1949), and, above all, the unwritten conventions of the constitution, such as responsible government.

Superficially, Louis Michael Seidman would appear to agree with this understanding of a constitution, desiring to import it into his American context:


Countries like Britain and New Zealand have systems of parliamentary supremacy and no written constitution, but are held together by longstanding traditions, accepted modes of procedure and engaged citizens. We, too, could draw on these resources.

However, Seidman goes much further: Let’s Give Up on the Constitution. Why? Because it's been ignored numerous times in the past and, as an 18th-century document, it is no longer suited to the 21st-century United States.


What has preserved our political stability is not a poetic piece of parchment, but entrenched institutions and habits of thought and, most important, the sense that we are one nation and must work out our differences. No one can predict in detail what our system of government would look like if we freed ourselves from the shackles of constitutional obligation, and I harbor no illusions that any of this will happen soon. But even if we can’t kick our constitutional-law addiction, we can soften the habit.

Yet what if it turns out that the most central of these "entrenched institutions and habits of thought" is the respect that Americans hold for the very document he wishes to abandon? No one is asking Seidman or anyone else to believe that its origin is divine, but one would be foolish to give up on something as crucial as the general reverence for the rule of law, which can hardly be taken for granted in much of the world outside of the west. Seidman is, of course, welcome to work for changing the law, but it seems incomprehensible that a constitutional law professor would be so ready to relinquish, not just an old document, but that intangible and durable consensus undergirding its status — and indeed his own profession.
Posted by David Koyzis at 23:05 No comments:

The two lives of the Virgin Mary

Here is my most recent "Principalities & Powers" column from Christian Courier, dated 10 December 2012. It is cross-posted with my Genevan Psalter blog.

Jesus’ mother Mary can be said to have had two lives: the one recounted with tantalizing brevity in the Scriptures and the one bequeathed to her in subsequent centuries by the church, which made her an object of veneration. Mary, of course, plays a prominent role in the infancy narratives in Matthew and Luke and at the beginning of Acts.

Luke 1 recounts the visit by the angel Gabriel to the Virgin Mary in Nazareth, announcing that she would give birth to the promised Messiah, the one who would save his people from their sins. Although we are told that she at first questioned how this could be, given her virginity, and that, in response to Gabriel’s explanation, she said: “let it be to me according to your word,” we are not told much else.

This is where Mary’s “second life” comes in, with later writers embroidering the biblical account with their own additions. For example, the second-century Protevangelion of James tells us that her parents were named Joachim and Anna (or Hannah in Hebrew). Lamenting her barrenness, Anna promises that, if God will grant her a child, she will dedicate him or her to the Lord’s service in the Jerusalem temple. An angel appears to Anna and informs her that her prayers have been heard and that she will indeed bring forth a child. In a plot twist similar to that of the Old Testament story of Hannah and the child Samuel, once her daughter Mary is born and attains the age of three, Anna entrusts her to the priests at the temple.

When Mary hits puberty, the priests decide to marry her to an elderly widower named Joseph, who has children by a previous marriage. When she is sixteen years of age, she is found to be pregnant. The author of the Protevangelion then recounts an entirely plausible scenario in which Mary and Joseph are condemned for having secretly married without the assent of the larger community. The priests subject the distraught couple to trial by ordeal, making them drink a concoction that will harm them if guilty but will not harm them if innocent. They survive the ordeal, and the plot continues with the birth of Jesus at Bethelehem.

It is, of course, difficult to determine where these extrabiblical stories came from or how they developed. It is possible that Mary’s parents were really named Joachim and Anna. Or it could be that, given the obvious literary dependence of Mary’s Magnificat (Luke 1:46-55) on the much earlier song of Samuel’s mother Hannah in 1 Samuel 2:1-10, a tradition began that Mary’s mother was also named Hannah.

In any event, Mary’s status became the subject of the Christological disputes of later centuries. In AD 431 the First Council of Ephesus declared Mary Theotokos (Θεοτόκος), or God-bearer, commonly rendered in English as the Mother of God. This was less a statement about Mary than an affirmation that her Son Jesus was fully God and fully man. 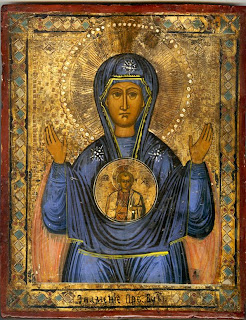 Indeed, in Orthodox iconography Mary is rarely portrayed without her Son, who is shown in her arms, seated on her lap or even inside a stylized circular womb, fully clothed and his head wrapped in the traditional gold halo.

The sixteenth-century Reformers continued to esteem Mary. Ulrich Zwingli, who reformed the church in Zürich, even retained the first part of the Ave Maria in his initial liturgy: “Hail, Mary, full of grace. The Lord is with you. Blessed are you among women and blessed is the fruit of your womb, Jesus.” Recognizing its scriptural origins (Luke 1:28, 42), Zwingli argued that “the Ave Maria is not a prayer but a greeting and commendation.”

Reformed Christians do not request Mary’s intercessions before God, primarily because Scripture is deafeningly silent on the matter. However, all Christians of whatever tradition do well to emulate Mary in her ready acceptance of God’s will for her life, despite hardships incurred, and in her jubilant expression of praise: “My soul magnifies the Lord, and my spirit rejoices in God my Saviour!”
Posted by David Koyzis at 13:53 No comments:

If Pakistan and Bangladesh had not gone their separate ways four decades ago, Pakistan would be the third most populous country in the world today. As it is, however, Pakistan is the 6th largest country and Bangladesh the 8th. Furthermore, if India and Pakistan had not gone their separate ways six and a half decades ago, India would be the most populous country in the world, outranking China by nearly 200 million, which amounts to a population of six countries the size of Canada.
Posted by David Koyzis at 17:04 No comments:

Not quite so simple: reforming royal succession

News of the Duchess of Cambridge's pregnancy has brought the royal succession issue to the forefront. The CBC reports: Royal succession laws set to be changed.


Last year, leaders of Britain and the 15 former colonies that have the queen as their head of state informally agreed to establish new rules giving female children equal status with males in the order of succession — something that will require legal changes in each country.

"Put simply, if the Duke and Duchess of Cambridge were to have a little girl, that girl would one day be our queen," Prime Minister David Cameron said at the time.

Canada is, of course, one of the 16 Commonwealth realms that recognize the Queen as head of state. In order for a change in the succession to the Crown to be successful, more than the agreement of the heads of government is needed. Each realm must enact the relevant statutes to make this possible, and this requires parliamentary approval. In Canada's case it would seem to require an amendment to our Constitution Acts under sections 41 and 41(a) of the Constitution Act, 1982. Such an amendment would require the assent of both chambers of Parliament and all ten provincial legislatures. Past efforts at formal constitutional change, most notably the Meech Lake and Charlottetown Accords, illustrate that such unanimity is not easily procured. We could conceivably end up with a king while our fellow Commonwealth realms go with a new queen.

Of course, in the second decade of the 21st century the notion of equality of opportunity for men and women is fairly securely established in our political culture, so it might not be that difficult to carry off. All the same, the larger issue of nondiscrimination will have been only partially settled by the requisite legal and constitutional changes. Sex discrimination, yes. But obviously not age discrimination. Hereditary monarchy is intrinsically discriminatory against younger siblings. If this form of discrimination were ever to be addressed, it would seem to make the monarchy itself untenable. Because only one person can occupy a single office, the process of determining who will fill it necessarily discriminates against those ineligible for it on a variety of grounds. The elimination of sex (or gender) as a criterion for succession is a reform whose time has undoubtedly come, although it is not obvious to some of us that it is any less fair to favour males over females than it is to favour the eldest over younger siblings.
Posted by David Koyzis at 11:00 1 comment:

Don't diss the Swiss: downsizing the US presidency


Last week I posted my Capital Commentary piece, Winner Take All or Splitting the Difference: Lessons from Switzerland. Now someone has brought this article to my attention: Who Needs a President?, by Bill Kaufmann. If only the New Jersey Plan had won out over two centuries ago:

No matter which hollow man occupies the bunker at 1600 Pennsylvania Avenue, the evidence from 225 years points to an inescapable conclusion: the Founders erred horribly in creating the presidency. To invest in one man quasi-kingly powers over the 13 states then, 300 million people and half a continent today, is madness. And it didn’t have to be this way.

Many Anti-Federalists proposed, as an alternative to what they called the “president-general,” either a plural executive—two or more men sharing the office, a recipe for what a sage once called a wise and masterly inactivity—or they wanted no executive at all. Federal affairs would be so limited in scope that they could be performed competently and without aggrandizement by a unicameral legislature—that is, one house of Congress—as well as various administrative departments and perhaps a federal judiciary.

The New Jersey Plan, fathered by William Paterson of the Springsteen State, was the small-f federal option at the Constitutional Convention. It is the great decentralist what-might-have-been. The New Jersey Plan provided for a unicameral Congress with an equal vote for each state, and copresidents chosen by Congress for a single fixed term and removable by Congress if so directed by a majority of state governors.

Obviously one cannot reverse history, but one wonders whether it might be possible even now to recognize the key anti-federalist insights and to implement reforms that might curtail the powers of an imperial presidency.
Posted by David Koyzis at 14:16 No comments: