Twenty-some years ago my sister was in France, studying Gregorian chant with the monks at the Abbaye Saint-Pierre in Solesmes. During her time there, the 14th of July rolled around, when the rest of the country celebrates la Fête nationale, better known to us as Bastille Day. But things were quiet in Solesmes and the surrounding countryside. Curious at this lack of merriment, my sister asked why they weren’t joining in the celebrations and was greeted with faces registering shock. In a heavily Catholic region, they would never consider observing a day that marked the start of a godless revolution that wreaked such havoc on the Church, France and the rest of Europe.

There are now 351 days remaining until the next Bastille Day. As we await its occurrence, I would like to propose for that day a counter-holiday to be titled AR Day, “AR” standing for Anti-Revolutionary. After the generation of war and instability set off in 1789 finally ended with Napoleon’s defeat in 1815, many Europeans, especially those still loyal to the gospel of Jesus Christ, set about attempting to combat the ideological illusions the Revolution had engendered. This entailed breaking with the modern preoccupation—nay, obsession—with sovereignty and recovering a recognition of the legitimate pluriformity of society.

In any ordinary social setting, people owe allegiance to a variety of overlapping communities with differing internal structures, standards, and purposes. These are sometimes called mediating structures, intermediary communities or, taken collectively, civil society. This reality stands in marked contrast to liberal individualism and such collectivist ideologies as nationalism and socialism, each of which is monistic in its own way—locating a principle of unity in a human agent to which it ascribes sovereignty, or the final say.

Recognizing that the only source of unity in the cosmos is the God who has created and redeemed us in the person of his Son, Christians are freed from the need to locate a unifying source within the cosmos. Thus the institutional church can be itself, living up to its divinely-appointed mandate to preach the gospel, administer the sacraments, and maintain discipline. The family is free to be the family, nurturing children as they grow to maturity. Marriage is liberated to be itself, free from the stifling constraints of the thin contractarian version now extolled in North America and elsewhere. And, of course, the huge array of schools, labour unions, business enterprises, and voluntary associations have their own proper places, not to be artificially subordinated to an all-embracing state or the imperial self.

This pluriformity is something worth celebrating! It may sound perfectly mundane when described in the way I have here, but the fact that the followers of today’s political illusions find it so threatening indicates that we cannot afford to take it for granted. Here are some suggested readings that highlight this dissenting anti-revolutionary tradition:
I could go on and list many more resources, but these will suffice for purposes of our new holiday. I propose that we celebrate it by holding public readings from these and similar works. The food would consist of such anti-revolutionary delicacies as boerenkool met worst, haggis, Brazilian pães de queijo and pamonhas, and, for the sake of all those Byzantine-Rite Calvinists out there, loaves of white bread with taramosalata, Kalamata olives, and cruets of extra virgin (Greek!) olive oil.

Music will consist of mass communal singing of the Psalms, preferably from the Genevan Psalter. Additional music will be provided by (why not?) the monks of the Abbaye Saint-Pierre in Solesme! Let’s do it!

This is a numerically altered version of David Koyzis's debut column at Kuyperian Commentary.
Posted by David Koyzis at 10:21 No comments:

To my students: a reluctant farewell 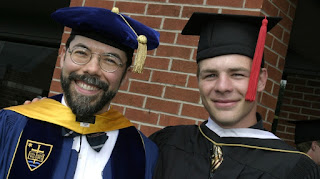 When I began teaching thirty years ago, I had not anticipated how much I would grow to love the young people in my classes. At Notre Dame during my graduate student years, I had been just another teaching assistant, and thus one more obstacle for the ambitious undergraduates to get past on their way to (for most of them, it seemed) law school. All of that changed when I arrived at what was still called Redeemer College in the autumn of 1987.

In the first course I taught, an introductory political science course, I made a number of missteps—nothing serious, just the ordinary kind that come with inexperience. Nevertheless, at the end of the term, when I read the student evaluations, quite a number of them generously offered this assessment: “Has potential to become an excellent professor.” This could have become a deflating experience, but instead I took heart from their words, and it became an incentive for me to improve my performance in the classroom.

The early years were, of course, filled with the normal stresses of multiple preparations of courses from the ground up. Many a beginning teacher reports that her ambition is simply to keep up with the students from day to day, and that was my experience as well. Nevertheless, despite all the busyness, I made time outside the classroom to be with my students and to converse with them. In the process I found that I was developing a deep love for them which lasted for three decades.

Two episodes stand out for me.

Not long into my teaching career, I was sitting at a cafeteria table with several of my students. One young lady repeated to me something I had said in class as though it were gospel truth, and I was startled and somewhat alarmed at the influence I was already having on her. That night I was unable to sleep, as the words of James 3 echoed through my head: “Let not many of you become teachers, my brethren, for you know that we who teach shall be judged with greater strictness.” I quickly recovered, of course, but I was beginning to comprehend the awesome responsibility that teachers carry for communicating truth to the young people in their care.

The second episode occurred after I was married and shortly after our daughter was born three months premature. Theresa had been in two successive hospitals for more than ten weeks after her early birth. Still less than five pounds when she went home with us, she was released from hospital on the very day that Ontario’s Golden Horseshoe was hit by a snowstorm of historic proportions. (Remember when Toronto’s mayor called on federal troops to help dig his city out?) Not knowing what to do, I phoned one of my students on campus, and he brought some of his friends over to our house. They freed our driveway in little time, and we were able to get to St. Joseph’s Hospital on schedule to bring Theresa home. This young man, now in his forties, is still a close friend.

To all of you whom I was privileged to teach over the decades, know that you have my undying affection and loyalty. I have sought above all to show you that the belief that our world belongs, not to ourselves, but to the God who has created and redeemed us has huge implications for political life and for the animating visions underpinning it. I hope I have communicated to you a hunger for justice, especially for the most vulnerable in our society as well as for the communities that support them. My greatest prayer for you is that you will continue to be agents of God’s kingdom in this world for whom Christ died.

In the meantime, although I am unwillingly leaving my current students behind, I fully intend to maintain the friendships I have formed over the years with so many of you. Do stay in touch!

After thirty years of service at Redeemer University College, David Koyzis’ position was terminated due to financial and curricular restructuring. He is currently seeking employment elsewhere and asks for readers’ prayers in the meantime.
Posted by David Koyzis at 10:59 No comments: