German Chancellor Angela Merkel has scored a victory for her CDU-CSU coalition over the Social Democrats, which were part of a grand coalition government for the past four years. It looks as though the old Christian Democratic alliance with the Free Democrats will return to form a new centre-right government.
Posted by David Koyzis at 11:54 No comments:

Why abortion is different

The following is this month's instalment of my regular column, "Principalities & Powers," for Christian Courier, dated 14 September. Isn't it time you subscribed to Christian Courier today?

Over the years in this space I have been critical of those pro-life Christians who cast their votes solely on the abortion issue. After all, governments have a full array of duties to perform in fulfilling their central task of doing public justice. Even if a government fails in one area, it may discharge its other responsibilities conscientiously, thus earning the support of its citizens. On the other hand, a given leader may claim the pro-life label and yet demonstrate incompetence in governing. This ought not to be taken lightly.

However, those claiming that abortion is just another issue are themselves on shaky ground. In the current policy debates in the United States, a number of activists are claiming that health care too is a moral issue, as are the environment and the minimum wage. It would not do to belittle such claims, because there is a large measure of truth in them.

Yes, health care is important. It is only just that all people have access to the best medical attention possible so they can fulfil their life callings. Similarly, it matters that we protect the environment, because we owe it to future generations whose lives will depend on it. Christians in particular are aware that, as God’s image-bearers, we have been given a stewardship over his earth, which we are to use wisely and carefully. It is indeed necessary that we ensure that all workers be able to feed and clothe their families and to keep a roof over their heads.

Nevertheless, not all issues necessarily have the same import or significance – something the language of morality may mask. In fact, there is a qualitative difference between abortion and the cluster of issues touched on above. In the case of the latter, no one disputes that the environment must be protected; the current debate revolves around how best to do so. Some favour a market-oriented approach, while others are convinced that government must play a central role. Again no one denies the desirability of furnishing the best health care to all citizens. Disagreement arises over whether this is best done through private or public insurance plans. Though Canadians and Americans have taken different paths on the issue, both approaches have their flaws – serious flaws, as it turns out, which illustrates that calling health care a moral issue cannot itself resolve the political debate.

Abortion is different. Here the quarrel is not over the best way to protect the unborn; it is precisely over whether to do so at all. Those believing women should have the right to terminate a pregnancy hold this position despite the presence of the vulnerable child. Those who believe that the unborn deserve protection do so because of the child’s presence. This fundamental disagreement over what is at stake is what sets the abortion issue apart from most others. Proponents of the so-called consistent life ethic generally fail to comprehend this. Such bishops as Denver’s Charles Chaput are right to make a fuss over Catholic politicians who support abortion rights. Abortion is not merely a private opinion; it is a clear matter of justice that needs to be addressed head on.

This does not mean there is no room for compromise. It would be politically foolish for pro-lifers to push for a total ban on abortion and refuse to accept half measures that would fall short of this lofty goal. Yet it is quite another thing to deny, as some Christians do, that abortion is a justice issue at all and to equate it with, say, health care, where the overall policy goal, if not the means of getting there, commands general agreement.
Posted by David Koyzis at 13:09 No comments:

Posted by David Koyzis at 15:06 No comments:

Imagine, if you will, what it would be like if Christians were to hold competitions in chanting the Psalms similar to what we see below.

If Suzanne Haïk-Vantoura (1912-2000) is correct (which is disputed), it is possible that the entire Old Testament was once chanted. Listen to this NPR report below:

Here is Haïk-Vantoura's rendition of Psalm 23. Is her thesis plausible? I wouldn't presume to judge, but it is intriguing, if nothing else.

Posted by David Koyzis at 10:16 No comments:

Although the recently deceased Senator Edward M. Kennedy was far from being a pro-lifer towards the end of his life, this was not always the case, as indicated in this remarkable 1971 letter, which can be enlarged by clicking on the image below: 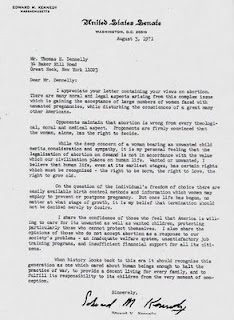 A more readable transcript of the letter can be found here.
Posted by David Koyzis at 14:38 No comments: