'World-and-life-viewitis' revisited: a response to Hart

Now that we have returned from our holiday on the balmy shores of the Huron Sea, it is time to respond to Darryl Hart's Losing the Keys and Finding a World View and to one of the comments he left in my original post on the subject.

Let me begin by observing that, because Hart has not offered a point-by-point rebuttal to my arguments, I am unable to respond on that level. What he has done is to employ a form of argument which, if it is not precisely ad hominem in character, certainly skirts at its edges. Says Hart:

But we are befuddled that folks like Koyzis do not seem to notice that most of the places where neo-Calvinism has tried to remedy secularism have also brought liberal Protestantism (or at least a movement away from Reformed Christianity) with it.

If a colleague gives me a paper he has written for my critique, it would generally not do for me to tell him in response that he has ugly circles under his eyes. To be sure, he may have been up late any number of nights working on this essay, and I may judge that he was unwise to do so at the expense of his health and alertness. In fact, his lack of sleep may have affected the quality of his paper. But to comment on his altered appearance does not in itself address the flaws in his argument.

Similarly, there may be all sorts of problems within the neocalvinist fold. Given that neocalvinists, like other Christians, are sinners saved by grace, it should not be unexpected that there will be failings — perhaps even spectacular failings — amongst them. To pretend otherwise would be naïve. Yet what is lacking in Hart's critique is a persuasive argument as to why the neocalvinist position logically leads in a liberalizing direction. Instead his argument is an appeal to fear: we don't want to end up like. . . [fill in the blank]. I might also point out that many of the older Reformed and Presbyterian bodies in Europe and North America experienced the effects of liberalism well before the arrival of neocalvinism on the scene.

Now it is true that neocalvinists have generally sought to build bridges to their fellow Christians in other traditions. They are not to be found in any single denomination, although their ecclesial roots are generally in Dutch Calvinism, and especially the Christian Reformed Church in North America. While many if not most of us, contrary to Hart's accusation, greatly appreciate the importance of the institutional church, we will not turn aside those evangelicals with more voluntaristic/baptistic views of the church. If Hart objects to this ecumenical focus in neocalvinism, then I suppose I would have to admit, for myself at least, to being guilty as charged. I will leave him to come up with the appropriate penalty for the likes of me.

One last point on the institutional church: I might indicate, to extend an olive branch, that I find much to like in many of the essays collected in Hart's Recovering Mother Kirk. His analysis and critique of evangelicalism with respect to ecclesiology and liturgy are dead-on. As someone with a special love for the biblical Psalms, I particularly applaud his endorsement of their use in the church's liturgy and hope his efforts at recovering sung psalmody bear fruit amongst his students and readers. I have listed his book in the bibliographic page of my own Genevan Psalter website. I would love to keep our conversation going on this topic at least.

Let us now turn to the rest of life outside the formal context of the worshipping community. Here once again is where Hart's position is weakest, and thus far he has said nothing to persuade me otherwise. Decades ago philosopher Herman Dooyeweerd showed the connection between the pretended autonomy of theoretical thought, as manifested in the special sciences, and the secularizing direction of western civilization. Hart again: "Many two-kingdom advocates [in whose company he counts himself] are not pleased with the way the West is going, or the state of higher learning in North America." Yet it is not at all clear how a solution will be found in re-emphasizing the neutrality of human reason in the face of the manifold ideological distortions it has facilitated and then tried to disguise. If there's a logical connection, he had best explain it, because his approach looks to me like an effort to turn back the clock to an earlier stage in the progression of the disease, rather than an attempt to remedy the disease itself.

But then there's this:

One point that neo-Calvinists don’t seem to understand about two-kingdom thought is that the two-kingdom view is not a solution to this world’s problems; two-kingdom folk actually don’t believe solutions will come in this fallen world until the consummation.

Whether or not Hart means this to apply to problems in the academy is unclear. If so, it appears to allow him an out with respect to the point I made in the previous paragraph. If we Christians must await the arrival of the eschaton to address the problems of this world, then perhaps it doesn't matter ultimately what we do with our schools, universities, businesses, labour unions, &c. And if this is true, then my objection that his commitment to neutral reason will inevitably secularize the university is perhaps beside the point, which I suppose leaves us nothing left to discuss.

Finally there's this curious remark from the comments to my first post. Hart again:

If I accept the liberal [political] order it is simply because it is a historical reality that makes pining for the Netherlands circa 1901 or the Holy Roman Empire around 1400 unbecoming.

So neocalvinists are reactionaries? I thought we were liberalizers. Which is it? This smacks of going after the beast with whatever weapon is at hand, appropriate or not. If a spear doesn't do the trick, try poison. If poison fails, there's always a pistol. Something's bound to work eventually.

I will reiterate something I hinted at in my first post. The validity of a particular school of thought can be assessed by how well it accounts for the fulness of created reality. In this case there is simply too much of life that Hart's worldview — and yes, he does have one! — cannot take into account.
Posted by David Koyzis at 04:58 No comments:

I do not know John Piper's works at all well, though I had some contact with him personally during his stint teaching at my undergraduate alma mater, Bethel College (now University), some 35 years ago. I do know any number of people who have benefited from reading his many books. Up to now, however, I have not usually associated cultural critique with Piper and his followers. This could be changing, if the following is any indication: America's debt to John Calvin. Where he might go from here I don't know, but it is encouraging to see him recommend Abraham Kuyper's Lectures on Calvinism. Might this form the basis for a fruitful dialogue between Kuyperians and Piperians?
Posted by David Koyzis at 20:43 No comments:

For educators attempting to engage their students to think christianly in their respective academic endeavours, Daniel Philpott's essay is a welcome and inspirational effort rooted in the Roman Catholic tradition of political reflection: One Professor’s Guide To Studying International Relations and Peace Studies From a Catholic Perspective. From the introductory paragraph:

Whatever else this passage [Colossians 1:15-20] means, it seems to say that all things, including thrones, powers, rulers, and authorities — that is, politics — were created and redeemed by Christ. There is nothing in the universe which escapes this fact, this logic. Does not this then imply that political pursuits are to be oriented towards Christ and his creative and redeeming work? This may seem like a difficult thing to imagine in a world where Stalin’s logic — or at least the logic of power and interest — seems again and again to prevail, tempting us to conclude that what the Church professes only has a limited and circumscribed significance. But if we believe what the Church professes, then this is not the case. The victorious resurrection of Christ is a total victory, applying to all things, even if it is not yet consummated. And if we believe what the Church professes, then we are called to participate ourselves in this victory.

We will not be seeing many more reports like this: Oldest WW1 veteran dies aged 113.
Posted by David Koyzis at 13:17 No comments: 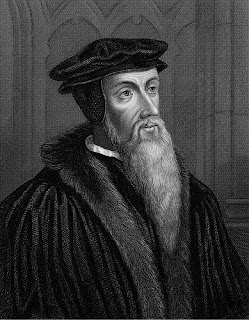 Still looking good after five centuries
Posted by David Koyzis at 04:52 No comments:

And while we're at it, see here for a powerpoint history of Canada's flag.
Posted by David Koyzis at 05:39 No comments: