As we are about a month into autumn in the northern hemisphere, my work continues to keep me busy. My newsletter is late this month, because our family was travelling last week, and this week I am making my way through the work that accumulated in our absence.

This week I will be participating in a Global Scholars event titled, "Friendship That Makes a World of Difference - A Cross-Canada Virtual Conference", subtitled, "Exploring Faith and Friendship in the Academy." I will be responding to a paper delivered by John von Heyking, chair of the political science department at the University of Lethbridge, Alberta, Canada. My response is part of a somewhat longer piece that I expect to publish shortly. 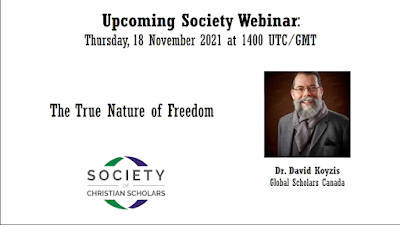 Next month I will be speaking at a Society of Christian Scholars webinar on "The True Nature of Freedom," based on the argument of my second book, We Answer to Another: Authority, Office, and the Image of God. I hope many of you will be able to attend.

Shortly after our federal election here in Canada, I was asked by First Things to write a brief postmortem, which was subsequently published here: Canada more divided than ever.

After Afghanistan was overrun by the Taliban in August, I published a column in Christian Courier titled, A humiliating defeat. Let us continue to pray for the people of that troubled country who have suffered so much in recent decades.

I recently found a letter that was sent to me by an American soldier in Vietnam when I was in grade five, and this prompted me to write a blog post: A Vietnam War memory. I'd love to know whether my correspondent is still alive after more than half a century.

My book, Political Visions and Illusions, continues to have an impact in the anglophone and lusophone worlds. Here are two commendations I have received recently:

“Periodically, I have used the text on political ideologies written by my longtime friend David Koyzis in my Christian Ethics courses. I'm using the second edition this year, which has been rewritten in light of political changes in the last couple of decades. I think this is one of the handful of [the] most relevant texts Christians should be reading right now, and I cannot recommend it enough.”

"This is the book I would recommend as urgent and obligatory for the leadership of the Christian churches in Angola, for a more balanced knowledge and to help Evangelical believers to be conscious and responsible citizens in Angola today. Everyone likes good political visions, but let us not forget that there are illusions as well."

Indeed, just this week I was informed that there is interest in an Angolan edition of Political Visions and Illusions, to which Vida Nova holds the rights in the lusophone countries. Whether such an edition is possible or even necessary I leave up to the three publishers to work out. Nevertheless, I am gratified at the interest in my book in the largest Portuguese-speaking country in Africa.

Four months ago, I was issued a challenge by an anonymous potential donor. Up until 31 December  2021, they will match every dollar raised over and above last year's funds up to $8,000. If a particular donor gave $200 last year, what counts this year for purposes of matching is what he or she gives above the $200 amount. All new donations from people who have not previously given count towards the total. This means that if someone gave $500 last year and gives $800 this year, $300 of that will be matched by the donor. A new donor who gives $1,000 this year will in effect be giving $2,000 in total. As always, our accountant will be conscientious in assuring that all qualifying donations are properly matched.

GSC's page for giving can be found here. Once you are in the page, scroll down to the heading marked DONATION DETAILS, and then choose one of the options under FUND. Americans may donate through our sister organization in the US. If you cannot afford to give, please do continue to pray for my work. I am thoroughly persuaded that God works through our prayers for each other.

Thanks once again to those of you who have been faithful in supporting my work both financially and in your prayers.