As our children and young people return to school this month, my own work has picked up somewhat after a bit of a summer lull. In particular, more speaking invitations have come in, and I am preparing for several online lectures and conversations during the autumn months. Here is a brief survey of what I've been doing over the past four weeks.

Upon completion of my Genevan Psalter project, I was interviewed by the Rev. Uri Brito, of Providence Church, Pensacola, Florida, and we had a 25-minute conversation about it: Genevan Psalter interview. I am currently seeking a publisher for my project.

Last month I had an online conversation with doctoral students at Wesley Seminary in Marion, Indiana. Most of these students are currently in pastoral ministry and are seeking further education. I was invited to talk to them by Dr. Aaron Perry, who has had them reading my Political Visions and Illusions. It was a stimulating experience, and I hope to reconnect with some of these in future, as they see fit.

Canadians will be going to the polls on monday, 20 September, and in the run-up to the federal election, I wrote two online articles for Christian Courier on the subject: Trudeau's gamble and The choices before us.

At the beginning of this month, I was interviewed by Jason Thacker of the Ethics and Religious Liberty Commission of the Southern Baptist Convention, and I was quite happy with how it turned out: WeeklyTech podcast interview. 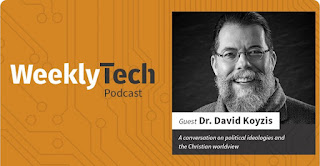 A few days later I was interviewed by Jean Francesco, a Brazilian studying at Calvin Theological Seminary in Grand Rapids, Michigan. This was part of a series connected with Teoclub, a group of Brazilians who meet regularly to discuss theology. The interview was conducted in Portuguese and English.

The next day I was interviewed by Arthur Loureiro over Instagram live chat in preparation for a lecture I will be delivering in November. This was also in English and Portuguese.

Last week I received in the mail from InterVarsity Press four copies of the second Brazilian edition of Political Visions and Illusions, which continues to have an impact in that largest of Latin American countries. Here are some testimonials gleaned from Twitter:

“Reading Political Visions and Illusions, of @DTKoyzis, a word that I can use to define it is 'elegance.' Its formulations, diagnosis and interventions are, in addition to being very sensible and precise, elegant. It is beautiful to read!”

“I love Koyzis texts. I think he's super balanced. And he likes Brazilians, you know?”

“The messianic hope in politics reveals a man who yearns for a saviour. I feel that I do not have the intellectual capacity to express the importance of this book, however, men such as @JonasMadureira [Vida Nova] and @guilhermevrc [Guilherme de Carvalho, l'Abri Brasil] strongly recommend it. Thank you, @DTKoyzis.”

“Very cool interview about the 2nd edition of his book, which is a classic here in Brazil.” [In response to Vida Nova interview]

“Koyzis, if all Brazilians could read Political Visions and Illusions Brazil would be much less crazy.”

And here's one more from North America:

“Just finished this book. What a gift! If you, Christian (and especially pastors), seek to understand or act within a political context you need to read this book. Ours is a better story than those offered by the available ideologies. I owe a debt of gratitude to @DTKoyzis.”

—Aeric Estep, co-host of The City on a Hill Podcast

Three months ago, I was issued a challenge by an anonymous potential donor. Up until 31 December  2021, they will match every dollar raised over and above last year's funds up to $8,000. If a particular donor gave $200 last year, what counts this year for purposes of matching is what he or she gives above the $200 amount. All new donations from people who have not previously given count towards the total. This means that if someone gave $500 last year and gives $800 this year, $300 of that will be matched by the donor. A new donor who gives $1,000 this year will in effect be giving $2,000 in total. As always, our accountant will be conscientious in assuring that all qualifying donations are properly matched.

GSC's page for giving can be found here. Once you are in the page, scroll down to the heading marked DONATION DETAILS, and then choose one of the options under FUND. Americans may donate through our sister organization in the US. If you cannot afford to give, please do continue to pray for my work. I am thoroughly persuaded that God works through our prayers for each other.

Once again, I want to thank everyone who has been so faithful in supporting my work financially and in prayer. May God bless you!