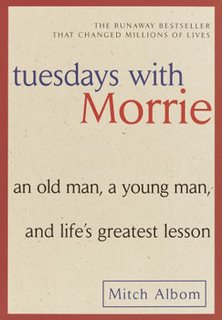 I somehow managed to miss this book when it first came out nearly a decade ago: Mitch Albom's Tuesdays with Morrie. Morrie Schwartz was Mitch's sociology professor at Brandeis University in the late 1970s, and the two of them grew close during that time, meeting on tuesdays to discuss the great issues of life. When Mitch graduated, he left his mentor behind to pursue fame and fortune as a sport writer for the Detroit Free Press, seemingly forgetting what he was taught: that relationships are more important than worldy success.

Years later, as Mitch was watching television, he learned from a Nightline report that Morrie was terminally ill with ALS. Regretting his own failure to maintain contact over the years, Mitch made a belated effort to renew his friendship with Morrie, going so far as to spend 14 successive tuesdays with him as his body gradually deteriorated. In the process he learned one last lesson from his old mentor: what it means to die, as well as how to live well in the love of friends and family in the meantime. Here's Morrie himself:

[G]iving to other people is what makes me feel alive. Not my car or my house. Not what I look like in the mirror. When I give my time, when I can make someone smile after they were feeling sad, it's as close to healthy as I ever feel. Do the kinds of things that come from the heart. When you do, you won't be dissatisfied, you won't be envious, you won't be longing for somebody else's things. On the contrary, you'll be overwhelmed with what comes back (p. 128).

This book was commended to me by one of my own former students whom I am blessed to call a great friend. The relationship depicted in it felt familiar to him, and he thought I should read it too. I am glad I did. Even more than the contents of Morrie's last lessons, I was moved by the evident affection that grew once more between him and Mitch in his final weeks.

When I first started teaching just under two decades ago, I was surprised at how much I would come to love my students and how much more they would return to me in loyalty and affection. Indeed I can easily say that if I had to give up all but one thing of my academic career, that one thing would be the ongoing relationships with my students and former students which I've found so enormously gratifying. I think Morrie would have said the same thing.

For anyone who has loved a former teacher or for any teachers who have loved their students, this is a must read.
Posted by David Koyzis at 05:11