Fascinating developments are occurring in the current British election campaign, as the country's traditional third party, the Liberal Democrats, or Lib Dems, are making a strong showing in the public opinion polls: British election upended by TV debates. 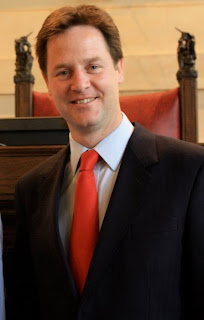 A poll for The Sun newspaper taken Friday had the Tories at 33 per cent, the Lib Dems at 30 and Labour at 28. A Daily Mail poll had [Lib Dem leader Nick] Clegg's party in front at 32 per cent, with the Conservatives at 31 and Labour at 28.

The results suggest Britain may be headed for its first minority Parliament since February 1974, which lasted all of eight months before another election was called.

Both surveys also hint at a looming constitutional crisis. Because of the British first-past-the-post voting system, seat projections show Labour could keep a plurality in the House of Commons, while the Lib Dems may win the popular vote but still finish a distant third in the constituency count.

The Liberal Democrats — a left-leaning party that opposed the 2003 Iraq invasion, favours greenhouse-gas reductions and would hike taxes on mansions — have for years appealed for Britain to introduce a more proportional form of representation.

"The game changer really would be if a coalition allowed the Liberal Democrats to get the electoral reforms they want," said Steven Fielding, a professor [of] politics at the University of Nottingham.

Here in Canada we are accustomed to minority governments, which we have had continuously since 2004. But not Britain. Of course, electoral reform would certainly necessitate multiparty coalition governments, which I personally think would be a good thing — for both countries.
Posted by David Koyzis at 07:35

I've been describing myself for a long time as a short-term Lib Dem, as while I have issues with many of their policies, I am deeply committed to their positive approach towards the European Union, and especially to meaningful electoral reform. And I don't mean mucking about with the House of Lords.

The last government had a working parliamentary majority despite being elected by little more than a third of voters; ever since then, and knowing that no government has been elected by a majority of voters since 1931, I've felt British politics needs serious reform. I don't think I like the idea of full-blown PR, as it could shatter the constituency link, but a form of STV, say for single-seater constituencies, would be a serious improvement.

Greg, I agree that a party list system would be inappropriate for countries like the UK and Canada. I myself prefer a German-style mixed-member-proportional system, although that was voted down here in Ontario a few years ago. STV requires voters to educate themselves concerning individual candidates, which they tend not to do judging from my own experience with American elections earlier in life.