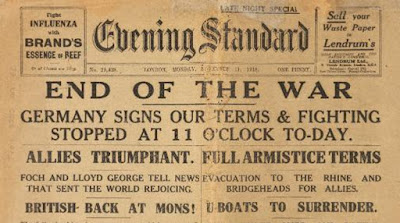 To begin with, all wars tend to erode settled customs and mores. They displace stable communities, uproot entire peoples, break up families and disturb political orders. Soldiers are herded together into military units, separated from the influence of parents, neighbourhoods and church congregations. Men are artificially segregated from women, exposing them to constant sexual temptation. Worst of all, they learn to kill and inevitably acquire the scars of battle, making it difficult to return to their communities and resume their ordinary responsibilities under the old rules.

More significantly, the two world wars, with their tens of millions of casualties, destroyed the faith of many, who wondered where God was in the midst of everything. Where was he when the Turks were massacring Armenians in 1915? Did he not care when six million Jews were systematically exterminated in the early 1940s? The secularizing Enlightenment itself had been given a big boost when the Portuguese city of Lisbon was destroyed by an earthquake in 1755. Voltaire argued that this event demonstrated that the world is not, after all, governed by a benevolent god. In the previous century the devastating Thirty Years War (1618-1648) seemed for many to show that traditional religion was itself a destabilizing influence and that all dogmas must be banished from the public square.

The wars of the 20th century raised the ancient problem of theodicy (How can a good God permit______ – fill in the blank) to the nth degree. Many older Dutch Canadians still bear the scars of German occupation of their country three quarters of a century ago. And, while they brought their faith with them to Canada, many of their relatives in the old country long ago stopped going to church, allowing their relationship to God’s people through Jesus Christ to lapse. This may be the most tragic outcome of the Great War and its aftermath.

Nevertheless, if Europe – with some exceptions – has largely abandoned the gospel, the rest of the world is catching fire with the good news of God’s kingdom. My trip to Brazil two years ago persuaded me that the Holy Spirit is working mightily in non-western settings. Yet even in Europe, while Muslim immigration has a higher profile, many newcomers have arrived with a vibrant Christian faith that is already making its presence felt. Moreover, recent reports indicate that Muslims in Germany are hearing the Good News and responding with enthusiasm.

A century after the Great War ended, God may be using his non-European followers to reverse some of its negative spiritual effects in Europe and elsewhere. That’s something to remember with gratitude and hope as we observe this year’s Remembrance Day.

This is a slightly modified version of my Christian Courier column for November.
Posted by David Koyzis at 11:47