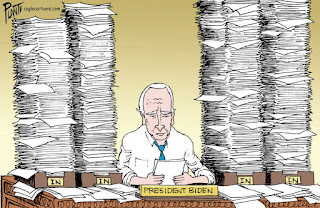 The new issue of Christian Courier carries my monthly column, "Principalities & Powers," titled, Biden's Burden: Will the new American president be able to make good on his promises? An excerpt:

I’ve often said that an American president must function as both king and prime minister, and that few have played each role equally well. I believe that Biden’s address was a suitably regal speech, laudably attempting to unite a divided nation – something that his immediate predecessor seemed altogether incapable of doing. But what sort of prime minister will he make? Presidential promises to bridge divisions too often falter over the reality of divisive policies pursued in the Oval Office and in Congress. And these will inevitably hamper his efforts towards unity.

Historically Biden has been a moderate Democrat, shunning the more radical elements in his own party. But over the decades he has also shown himself to be flexible, or, to put the matter more negatively, irresolute, changing his convictions as the times and his party appear to demand. This makes Biden’s actual discharge of his duties somewhat difficult to predict. Will he expand and harden the Democrats’ non-discrimination regime, even at the expense of religious liberty? Or will he refrain from unduly interfering in the institutions of civil society and the standards they maintain as part of their core identities? How he approaches this will determine whether he is genuinely capable of reaching out to his political opponents.