Prayer and fasting for Canada 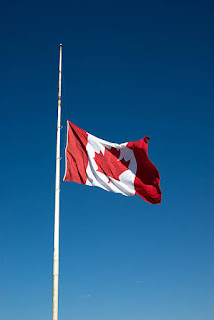 The flags are at half staff once again after the discovery of 751 unmarked graves of aboriginal children, who had been taken from their families and educated at residential schools operated by several church denominations. This policy was pursued by the federal government over several generations in an effort to assimilate forcibly these children into the majority European culture. The policy lasted from 1876 until as recently as 1996, when the last such school closed in Saskatchewan. In 1894 attendance at these schools became compulsory for aboriginal children. Thus far two such burial grounds have been discovered, but there will undoubtedly be more.

Tomorrow is Canada Day, a federal holiday once known as Dominion Day. It celebrates the day in 1867 when the Dominion of Canada was established by bringing together in a federal union Canada West (Ontario), Canada East (Québec), New Brunswick, and Nova Scotia. Typical Canada Day celebrations include parades and fireworks. From our vantage point on the Niagara Escarpment, we can see multiple fireworks displays in various cities in our region.

This year, however, many of us do not feel like celebrating. In light of these horrific discoveries, it might be in order to proclaim a day of prayer and fasting. Of course, most Canadians were not personally responsible for the abuses that occurred in these schools. I myself did not come to Canada until the late 1980s, and my ancestors were living in Europe, the Middle East, and the United States when Ottawa established the residential schools policies. But that is beside the point. When you immigrate to a country and take out citizenship, you become part of its history and the larger political community within which we are called to do public justice. As a Canadian I grieve along with my fellow citizens over the ways generations of aboriginal children were treated when they should have been loved and cared for as fellow human beings created in God's image.

Due to the current pandemic, celebrations will likely be muted anyway. Perhaps it would be better to use the day to mourn for our country and to spend time in prayer and fasting over what can only be described as a national disgrace.