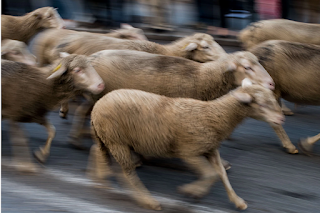 During my three decades of teaching, I witnessed generational changes in the students I taught. For example, I noticed an improvement in legibility of handwriting as printing and typing replaced cursive script, but this also meant that students wrote more slowly on examinations and thus produced less. Other things have changed as well, as William Deresiewicz points out in this intriguing article: We Aren't Raising Adults. We Are Breeding Very Excellent Sheep. At one time universities in North America operated in loco parentis with respect to their students, who were considered minors until age 21. This relationship was mostly abolished by the end of the 1960s when the age of majority was typically reduced to 18. However, have our universities subtly re-embraced their in loco parentis status in recent years? And have the students themselves been behind this? That's what Deresiewicz argues. Here is an excerpt:

We are back to in loco parentis, in fact if not in law. College is now regarded as the last stage of childhood, not the first of adulthood. But one of the pitfalls of regarding college as the last stage of childhood is that if you do so then it very well might not be. The nature of woke protests, the absence of Covid and other protests, the whole phenomenon of excellent sheephood: all of them speak to the central dilemma of contemporary youth, which is that society has not given them any way to grow up—not financially, not psychologically, not morally.

Children can’t be children if adults are not adults, but children also can’t become adults. They need something solid: to lean on when they’re young, to define themselves against as they grow older. Children become adults—autonomous individuals—by separating from their parents: by rebelling, by rejecting, by, at the very least, asserting. But how do you rebel against parents who regard themselves as rebels? How do you reject them when they accept your rejection, understand it, sympathize with it, join it?

The 1960s broke authority, and it has never been repaired. It discredited adulthood, and adulthood has never recovered. The attributes of adulthood—responsibility, maturity, self-sacrifice, self-control—are no longer valued, and frequently no longer modeled. So children are stuck: they want to be adults, but they don’t know how. They want to be adults, but it’s easier to remain children. Like children, they can only play at being adults.

I have sometimes wondered whether at least some of our social dysfunctions stem from segregating our children and young people according to age as we educate them, leaving them to form horizontal peer cultures with insufficient adult supervision. Previous civilizations apprenticed their youth to responsible adults who oversaw their transition to maturity. But since the late 19th century, we have shepherded our adolescents into secondary schools where they are left to form a distinctive youth culture set apart from the larger adult world of which they should increasingly be an integral part. Such segregation may exacerbate the phenomenon of "troubled youth" and the "generation gap" that appeared in North America following the Second World War. It has arguably contributed to the school shootings that have plagued especially the United States in the 21st century.

Age segregation appears to contribute to the inability of societies to maintain their traditions across time and to pass them down to succeeding generations. Accordingly, it also deprives members of the younger generation of the ability to find their own places within a world shaped by those traditions. One might think this would liberate them from the past to make their own world. But, no. Those who would reject tradition can do little more than to locate themselves within a tradition of rebellion against tradition—a cultural phenomenon with which we have become all too familiar since the French Revolution. Make no mistake: this tradition of rebellion asserts its own standards and claims an authority to which others are expected to conform. This makes the majority of would-be rebels more like sheep: easily controlled by those who would substitute their own ostensibly more enlightened ways for the received mores of their society.

Deresiewicz has written an entire monograph on this subject: Excellent Sheep: The Miseducation of the American Elite and the Way to a Meaningful Life, published by Simon & Schuster and available from the usual online vendors.