As someone aware of the connection between length of daylight hours and mood, I appreciate the long days of summer here in the northern hemisphere, when my wife and I can take walks together, visit the lovely garden venues for which our city is renowned, and enjoy the warmer temperatures for which Canada is definitely not renowned for most of the year. Many of you are taking your holidays this month and next, and I wish you all wonderful times for renewing your energies and taking advantage of a well-deserved rest.

My own work has slowed somewhat during this first month of summer, but I am still keeping occupied with various activities. The past few weeks I have been studying and writing about the United States Supreme Court's momentous decision in Dobbs v Jackson Women's Health Organization reversing Roe v Wade (1973). A draft decision had, of course, been leaked a few weeks earlier, so it was not unexpected. Nevertheless, many of us were surprised that, after nearly half a century, the Court ruled as it did in so definitive a manner. Here is my six-part series on the Dobbs ruling:

If you begin reading the first instalment, you can simply move to the next one by clicking on the link at the bottom, without needing to return to this page.

I have also been following rather closely the congressional hearings on the 6 January 2021 uprising in Washington, DC, and hope to write about these in the near future. Stay tuned to my blog where I regularly post my reflections. 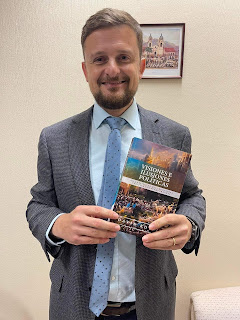 In the meantime, the newly-published Spanish-language edition of Political Visions and Illusions is beginning to have an impact in Latin America. I was privileged to talk at some length with Jaime Cabellero, director of Teología para Vivir (Theology for Living), which published my book two months ago. Cabellero is a Peruvian studying at Queen's University, Belfast. At the beginning of last month, as earlier reported, I had an online conversation with Fe Pública Chile which I found thoroughly enjoyable.

As far as I can tell, there seems to be a growing interest in Reformed Christianity in Chile, as well as other parts of Latin America. The photograph at the right is of Stephan Schubert, a member of the Chamber of Deputies, the lower house of the Chilean National Congress in Santiago, holding my book in his hands.

Now that this edition has been published, I am currently brushing up on my knowledge of Spanish, which I first began studying as an undergraduate. There is a huge overlap between Spanish and Portuguese, I am finding, although pronunciation differs considerably between the two languages--enough to cause at least some confusion to someone learning both simultaneously!

Speaking of Spanish, I am delighted to see the publication of a second edition of a Spanish translation of the complete Genevan Psalter, set to verse by Jorge Ruiz Ortiz of Barcelona, Spain. I hope this will be widely used liturgically within the Spanish-speaking world.

I do not often write film reviews, but my wife and I recently saw a film that I thought merited such treatment: Mr. Jones (2019), Agnieszka Holland's cinematic account of Welsh journalist Gareth Jones, who uncovered the truth about the Holodomor in Ukraine during the early 1930s. Here is my review of the film: Gareth Jones and the crimes of Stalin.

Incidentally, I have been asked about the origin of the pen and ink drawing beneath my signature below. This is the work of Brazilian artist Armando Marcos, who based his caricature on a portrait by local Hamilton photographer Hank Rintjema. In April, Marcos surprised me with this gift of my portrait, for which of course I am grateful.

I am, as always, thankful for your financial and prayer support for my continuing work. I would ask you again to consider a regular monthly contribution, as it makes it easier for Global Scholars to set an annual budget, including the modest salary I receive from the organization. Not everyone, of course, is in a position to contribute in this way, but if you are, please consider this option seriously. Furthermore, if you know someone with an interest in and means to support my work, I would be most grateful if you could give me their name and contact information. GSC's page for giving can be found here. Once you are in the page, scroll down to the heading marked DONATION DETAILS, and then choose one of the options under FUND. Americans may donate through our sister organization in the US. Thank you so much!

Yours in God's service, 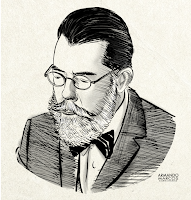